In 1992, at the youthful age of 26, I was self-employed and making a living as a picture framer. I was fascinated by the potential of framing as an art form. In addition to creating one-of-a-kind art pieces, I was heavily involved in other arts like airbrush silkscreen, gold plating etching and shadow boxes. Music Canada (formerly) Canadian Recording Industry Association (CRIA)) is a Toronto-based, non-profit trade organization that was founded April 9, 1963 to represent the interests of companies that record, manufacture, produce, promote and distribute music in Canada. It also offers benefits to some of Canada’s leading independent record labels and distributors.

At this point, I was established in the Canadian music industry as an official supplier. For many years, I would customize a unique design for the awards for the annual Canadian Music Week awards show. The show recognized all the best Canadian music acts of the year, radio and television awards and special lifetime achievement awards. So many of my awards adorn the walls of many Canadian stars including Guess Who, Celine Dion, Rush, and so many other recording artists. My company, Roy Créations Internationales, also supplied awards to the French-Canadian music industry. My art designs offered me a distinct niche in the music industry, and I had a growing reputation for creating unique one-of-a-kind collectibles. Since an early age, I loved playing guitar, so you just imagine how thrilled I was to be part of the music industry.

Elton John wrote a song called “Daniel”. This song always resonated throughout my life. Ironically, it bears the same name of my late brother who died tragically at 24 years old from a stupid gun accident. When an event like this happens in one’s life, it changes everything for sure.

I was 31 years old in August 1997, when Great Britain Princess Diana’s tragic death took place in a car bizarre accident. I, like most of the world, was very saddened and stunned by her loss! The funeral ceremonies were marked by Elton John’s incredible performance of “Candle in the Wind”. The original version appeared on John’s 1973 album Goodbye Yellow Brick Road and was released as a single in 1974. The lyrics of the song are a sympathetic portrayal of the life of Marilyn Monroe. (The song’s opening line “Goodbye, Norma Jean” refers to Monroe’s real name, Norma Jeanne [more commonly spelled Jean Baker.)

I was so touched by this tragic accident as it reminded me of my brother’s; a tragic loss indeed. I was also struck by the fact that all the song royalties went to the Princess Charity’s fund. I felt both my brother and Princess Diana deaths and Elton John being ever so present somehow represented a mysterious synchronicity in my life. I decided that if someday Sir Elton John came to my hometown, Montreal, that I would try to make him something special in my own way. One month later, I heard on the radio: Great news! Elton John’s Big Picture Tour is coming to Montreal for two nights (November 11 and 12, 1997) at the Montreal Forum.

I was very inspired when I started to draw my customized frame dedicated to Elton. I wanted to create something unique with gold, copper etching music sheets combined with CDs and 45 RMPs all 24k gold plated with suede mating and a classical gold wood frame. Motivated, I also decided to contact Elton’s record label in Montreal. I got in touch with the promotion department and a lady named Yasmine Mingay answered. With enthusiasm, she listened to my idea to create an incredible framed art piece for Elton, but she also told me that Elton John was not doing much meet and greet and that my idea although very good would be impossible to arrange. I was sad I could not be introduced to him.

Undeterred, I decided to still go ahead with my idea and dream. It took me 24 hours to develop and create the concept. I prepared all the template for silk-screening the music sheets on copper, polished it manually and gold plated in a bath. I did not have all the equipment, so I had to buy some for electroplating and etching copper with ferric chloride. Then after preparing the music sheets plaques and pieces. I cut all the matting there was representing 38 operations of multiple v-groove cuts all done by hand. When I finished the total framed product, its unique and special beauty stunned me.

Let’s fast forward to a week before Elton’s arrival in Montreal for his concerts. Again, I contacted Yasmine Mingay at the record label and after some convincing, she allowed me to bring the piece to her office so she could personally see what I had created including the personal letter I wrote for Elton to explain my gift and its inspiration. Yasmine cautioned me as well. She pointed out that Elton was used to receiving many awards and gifts. As more staff at the record company viewed my creation, it became apparent the pendulum was beginning to sway in my favour.

Yasmine phoned Elton’s tour manager. After chatting for at least 10 minutes, it was suddenly arranged that I would attend the concert at the Molson Center, downtown Montreal.

So, I left with a happy face not knowing what would happen next. The next day on November 11, 1997, I went to the Molson Center with the award. I patiently waited in a room for 30 minutes before Elton’s tour manager came to personally check on me and making sure I was not crazy. He asked me to show him the hugely framed 24’’ x 30’’ creation. I dug it out of the box and watched his face. He had never seen something like that before. 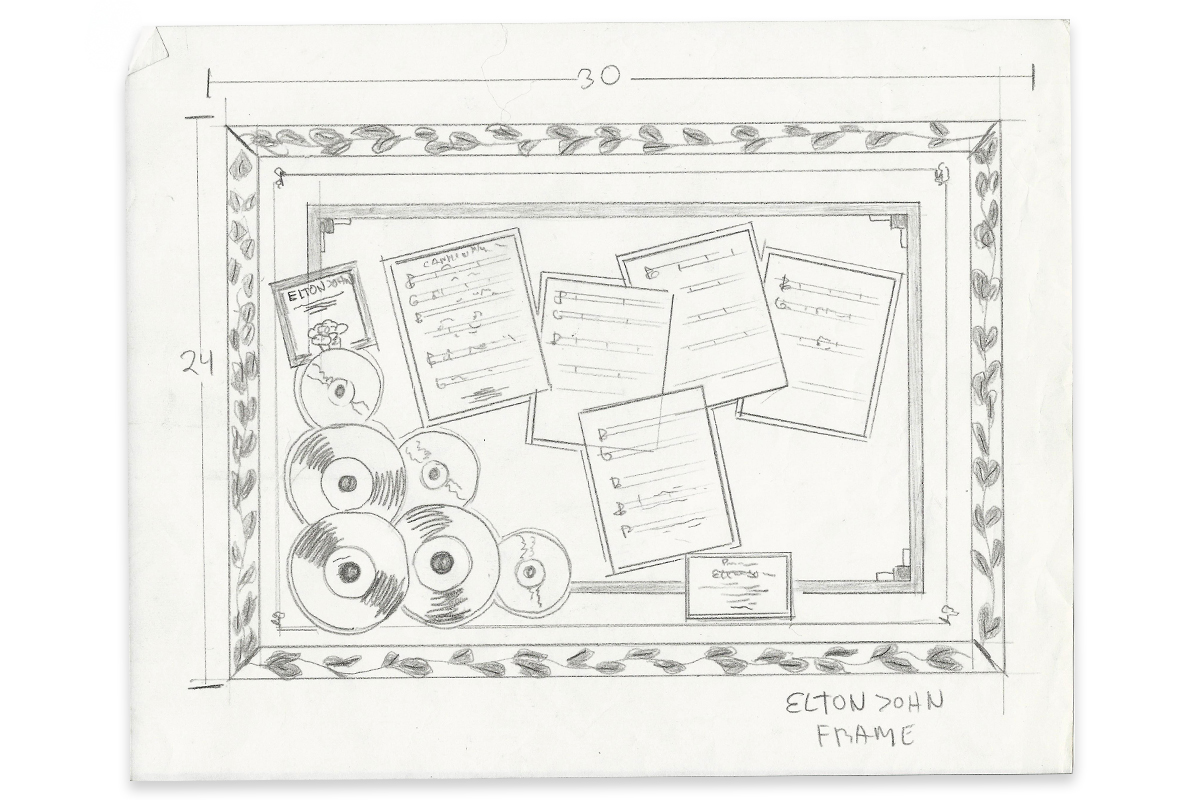 I remembered there was a big table with food, wine, beer and relaxing background music. I was in awe to see all this and be personally invited into Elton’s world. Ten minutes later, with the record label and many corporate people also present, Sir Elton John, himself, appeared.

Yasmine and the record company presented him with a CRIA award for his record sales in Canada. She then told him about a surprise that I wanted to personally present to him. Elton came to shake my hand and asked me to show him the framed art piece. Nervously, I unveiled his gift and Elton gasped! He said in international French “C’est très beau. Prenons une photo ensemble, mon ami” and then insisted we take a photo together while holding the framed piece. We all gathered there for the photograph capturing that very special moment. After that Elton returned to his private room with a big smile and the award, I gave him. I was on cloud nine, walking on air and the happiest man on earth as I had succeeded. Never give up and believe in yourself; this is the lesson I learned about myself that evening.

It took me three days to recover while thinking of these moments.

Ironically, a few years later, I believe in 2000 again I was lucky…to bring this photograph to another level

A picture is worth a thousand words. When I finally received the photograph, it became apparent I had made my dream a reality. The little boy inside my heart and soul who dared me to dream was right; it was like we all have childhood dreams and I was stunned that I, I had realized one of them.

It is so funny, a few years later, I believe it was in 2000, I was lucky again…to bring this photograph to another stage.

A friend that worked at Universal Music, Paul Jessop, called me one day and said he was going to Las Vegas to see Elton John starting his residence show. He was invited to a special launching event at the Caesar’s Palace. Paul was familiar with the photograph I had taken with Elton John in Montreal. It was hung in my office and displayed on my web page. Incredibly, Paul offered to take the photograph to Caesar’s Palace and get it signed by Elton. Thankfully, I now have the photograph signed by Elton John. What an unexpected twist of faith and irony to my story. Elton signed it “with love, Elton”. Two dreams in one!