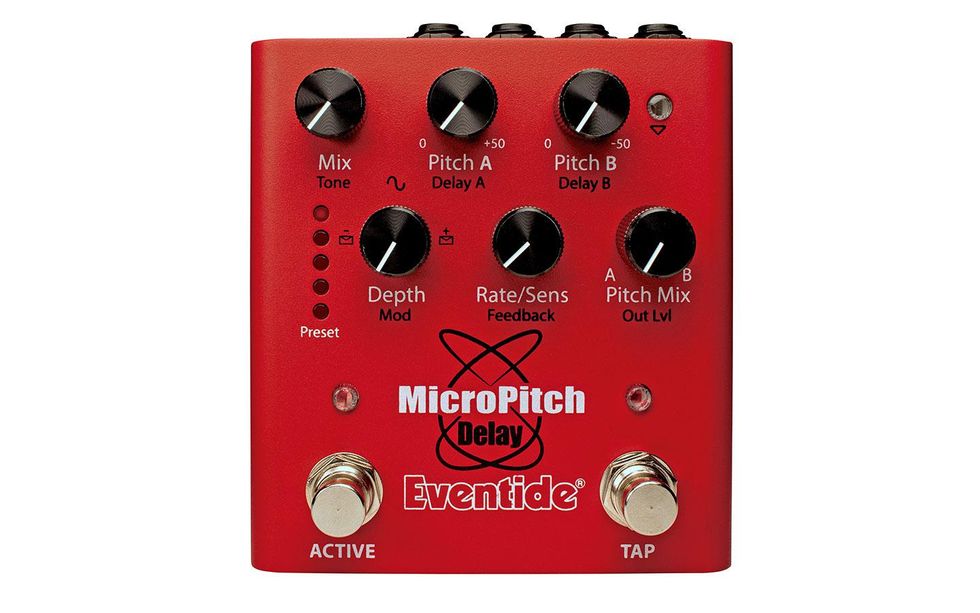 When introduced in 1975, the Eventide H910 Harmonizer was adopted by producers who recognized the signal-thickening power of this very early digital pitch shifter, delay, and modulator. But it didn’t take long before some users discovered that two harmonizers might be better than one. And by setting a pair of H910s to shift the pitch of the original signal by a few cents in opposite directions, adding a short delay to each signal, and then panning them, producers successfully fattened and expanded everything they ran through it—from vocals to snare drums.

Eddie Van Halen made the dual Harmonizer strategy particularly popular for guitarists. But as cool and legendary as that technique is, Eventide has never made a dual harmonizer available in a compact pedal format—until now. Eventide’s new MicroPitch Delay isolates the fine-tune pitch shifting and delay functionality from the rackmount Harmonizers and delivers vintage-flavored modulation, totally freaked-out stereo effects, and lot of sounds in between.

The essential recipe behind the MicroPitch Delay is simple: run an input signal through two separate pitch shifters with discrete delay time settings that can be tuned 50 cents sharp or flat. Add mix and modulation controls along the way, and suddenly things sound very expansive.

The MicroPitch Delay offers plenty of excitement when plugged into a single amp. But it really delivers in stereo.

By playing around with subtle tweaks of pitch, modulation, and delay-time controls, you can uncover spacious rotating speaker–style tones, retro flanger vibes, and warbly delay settings that sound great in small or liberal dosages. As you work your way into the deeper end of those waters, you’ll discover warped-tape vibrato sounds and even vertigo-inducing Shepard tone/barber pole tones. The addition of envelope-controlled modulation makes the pedal feel even more interactive and responsive, which is especially fun when digging into its wilder side.

The MicroPitch’s layout is similar to Eventide’s other recent compact pedal offerings, the Blackhole and the UltraTap. Six knobs control both primary and secondary functions, the latter of which are accessed by pressing a small LED button. The primary controls are for pitch and modulation, and the secondary controls tweak the twin delay signals, so you’ll likely be jumping back and forth between the two modes a lot. This isn’t the most intuitive effect at first, and it can be easy to get lost as you switch between modes—particularly because there are no readouts like Eventide’s larger effects. But it wasn’t long before I could use my ears to reliably navigate settings.

The MicroPitch Delay offers plenty of excitement when plugged into a single amp. But it really delivers in stereo. Some settings, in fact, like high-delay feedback, can sound a little flat in mono. But a stereo spread allows every facet of your signal to develop in a fuller, more immersive way. By tweaking the two delay-time settings you can even achieve polyrhythmic Frippertronics- and loop-style effects that become endless rabbit holes for experimental noodling.

Whether you’re looking for subtle ways to make your guitar tone pop with vintage flair, add dimension with stereo, or achieve totally freaked-out, modulated pitch mismatches, the MicroPitch has you covered. There’s a bit of a learning curve, but the smart, simple controls and settings are easy enough to figure out and manipulate on the fly. And even though many of the sounds you’ll seek and uncover are familiar parts of the modern music landscape, there are plenty of surprises just a few tweaks away.

Products featured are independently selected by our editorial team and we may earn a commission from purchases made from...

Get the kids cooking this summer | Features

How The Beatles: Rock Band Was Made | Maclaine Diemer | YCUT Interviews