A Creative Approach to String Bending 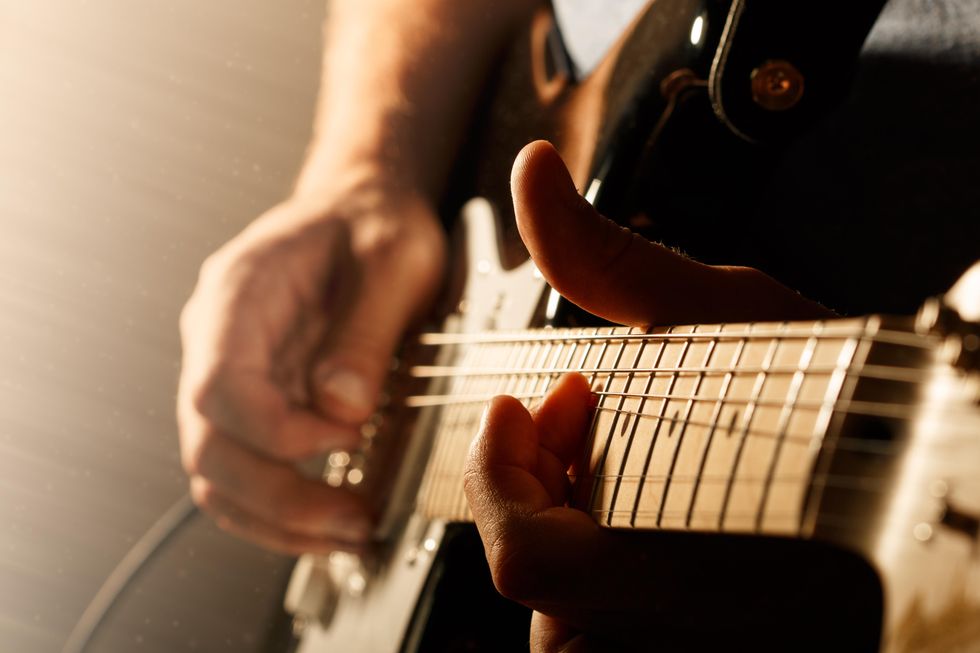 Bending strings is one of the main pillars of rock, country, and blues playing. Imagine if B.B. King, Brent Mason, Brad Paisley, or Jimi Hendrix played without using any bends. It would be strange, right? The main bending techniques used by those four (and nearly every other person to pick up an electric guitar) will take you pretty much anywhere you need to go as a guitarist, but there are a few approaches to bending that will take you down roads less travelled.

The following examples give you specific licks to plug right into your playing, but the main idea is to gain a different approach and perspective when it comes to bending strings.

Ex. 1 is probably the most ‘countrified’ of the examples but works well as a tension builder within several genres. The lick is focused on the tension created by bending one whole-step on the 2nd string while fretting the note one half-step above the bend on the 1st string. The bend is released before moving to each section. The “rub” created by this pulls the listener’s ear until the resolution, which is A. The first finger frets all notes on the 1st string, and the third finger frets all notes on the 2nd string.

Ex. 2 is where we start to look at what I call a “chord based” approach to bending. Using a simple I–IV vamp in D, I demonstrate two simple ways to use triads with bends. On beat 3 of the 1st measure, I bend the E one whole-step up to F# with my second finger to create a D major triad (D–F#–A). In the 2nd measure on beat 1, I bend the F# up one half-step with my 2nd finger to form a G major triad (G–B–D). I prefer to play with a hybrid pick-and-fingers technique, but it sounds just as clean when all three notes of each triad are played with a pick.

In Ex. 3 I work with a descending progression in E, using a bend at the top of a triad with my first finger to form each section. This progression sounds great on its own, but using each of these voicings in other contexts can really add some interesting flavor to your playing.

The first shape uses an Esus2 shape, bending the top note up one whole-step with the first finger to create an E major triad (E–G#–B) and then releasing the bend. The second shape has the same mechanics, only it uses an F#7 chord. The third shape continues that descending pattern, using the exact same bending mechanics but with an A6 sound. To finish the lick, I play an Esus triad using the open 6th string. Then, I use a pull-off to hit the G natural before bending it up a half-step to create an E major triad.

The progression from the previous example also works well on the upper three strings of the guitar and helps build finger strength. In Ex. 4 rather than bending the top note of each shape, I’m bending the bottom note. It follows the same Esus–F#7–A6–E harmony and resolves with the same shape we used to wind up Ex. 1.

In this last example (Ex. 5), I’m demonstrating three simple triad shapes that work well with bending the bottom note. We start with one that uses the 1st finger to bend, creating an Emaj7 sound. The second shape works over a B7, and the third resolves to E major. They are all very simple voicings to create but come in handy when you need something that sounds just a tad different.

Bending into triads can give your playing a little sparkle when needed, whether comping or soloing. The examples given in this lesson are great to use, but the idea here is to apply this concept to different shapes all over the fretboard. Some shapes might take some muscle building, but the work is rewarding. Get creative with your voicings, create and resolve tension, and most importantly bend in tune!

BIGGEST UNBOXING EVER!! …and GIVEAWAY!