In the tumultuous year of 1848, France once again saw revolution. The country had seen revolutions before, in 1830 and, most famously, in 1789. Each revolution swept away or sweepingly altered prevailing tastes in the decorative arts, and the February Revolution of 1848 was no different, ushering in an age with a distinctive, eclectic style.

The 1848 revolution brought to power Napoleon III, whose reign lasted until 1870, when France contested Prussia in war and, losing, lost its Second Empire. While the period that followed Napoleon III—known to all as the Belle Époque—is celebrated today for its luxury and grandeur, the magnificence and artistic diversity of that time are rooted in the era of Napoleon III. Napoleon III’s Salon in his apartment at the Louvre is pictured above (image courtesy of Wikimedia Commons / Daniel Perez Sutil), demonstrating the opulent granduer of his tastes.

The decorative arts during the period of Napoleon III and the Belle Époque are characterised by their eclectic nature, incorporating aspects from a host of historical styles and a variety of materials, melded together into something new by novel methods and, perhaps most importantly, by a newly found taste for medleys of past fashions.

In addition, a burgeoning bourgeoisie created an unprecedented demand for luxury goods, allowing the most skilled artisans and workshops to produce a wonderful array of objects—a varied selection of which will be discussed in this article. For a detailed analysis of the development of the Napoleon III and Belle Époque styles, please refer to our previous blog: 19th Century French Furniture Guide: Part 2.

With the revolution of 1789, the styles of decorative art associated with royalty and monarchy were cast as inappropriate and judged intolerable in the newly enlightened, liberated Republic. Between the 1790s and 1850s, the leaders of France attempted to establish new tastes, often with considerable success: Napoleon Bonaparte occasioned the Egyptian-infused, Roman-inspired Empire style, which fuses a sturdier and simpler idea of Neoclassicism with forms and motifs deemed fit for a new Empire.

Despite this, most French leaders of the early nineteenth century remained anxious of associating too readily with former Ancien Régime tastes in the decorative arts. Under Charles X, for instance, the Empire style was softened, and comfort became a greater factor, and this trend largely continued under Louis Phillippe, whose rule ended with the rise of Napoleon III.

It was not until the time of the new Napoleon and Empress Eugénie that pre-1789 styles once again became fashionable among furniture makers, patrons, and the ever more prominent bourgeoisie.

Empress Eugénie, captivated by the life of Marie Antoinette, the Queen of Louis XVI, found fascination in the style that predominated during her predecessors’ reign. The manner of Neoclassicism that flourished under Louis XVI was imaginatively reintroduced and re-established as tasteful during the 1860s.

Pendant pair of portraits of Napoleon III and Empress Eugénie by Franz Xaver Winterhalter, painted in 1853.

The result of this eclecticism is a decorative scheme evocative of a charming array of historical styles: Neoclassical mounts are integrated within single pieces of furniture with the rocaille motifs and cabriole legs common in the Rococo, while the love of gilt accents evident in the Baroque is interspersed with moments of design redolent of the Renaissance.

The Napoleon III style is characterised by the idea that beauty is found not only in form and shape, but also in ornament. Ornament proliferates in Second Empire decorative art, and a sense of horror vacui is patently evident.

Unadorned surfaces are rare in the Napoleon III style, and unmounted edges and corners uncommon. In addition to marquetry, Boullework, lacquered and painted surfaces, and gilt mounts, among a host of other decorative practices, polychromy is favoured, and techniques such as Renaissance style inlaid stone are popular, melded with Baroque gilding, Neoclassical lines, and Rococo sensuality. 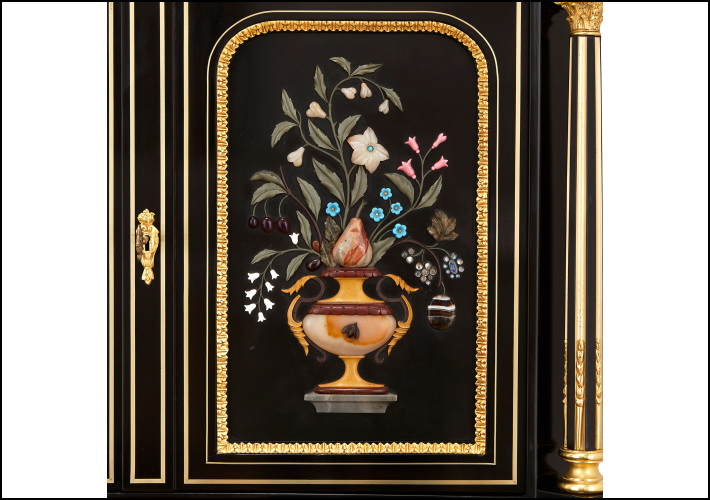 A floral arrangement set in a classical vase composed from mounted hardstone, an ancient technique incorporated into an ebonised wood and Neoclassical ormolu bonheur du jour.

The result is a style of furniture designed for comfort, both sensually and visually: the eye adores the coloured surfaces and assortment of lines, and one cannot help but delight in the panoply of decorative techniques, materials, and styles. The Napoleon III style, and the fashions that proliferated during the Belle Époque, is essentially uncanonical, merging and melding a parade of historical tastes into something eclectic, charming, and inherently joyful.

One of the most distinctive combinations of historical styles to proliferate during the latter nineteenth century is that of eighteenth-century style porcelain appended with Neoclassical ormolu (or gilt bronze) mounts. In this blend, porcelain vases (the shapes of which often refer to classical antecedents, such as Classical Greek amphorae) painted with Rococo style, Watteau-inspired portrayals of charmed courtly society, are combined with distinctly Neoclassical mounts. 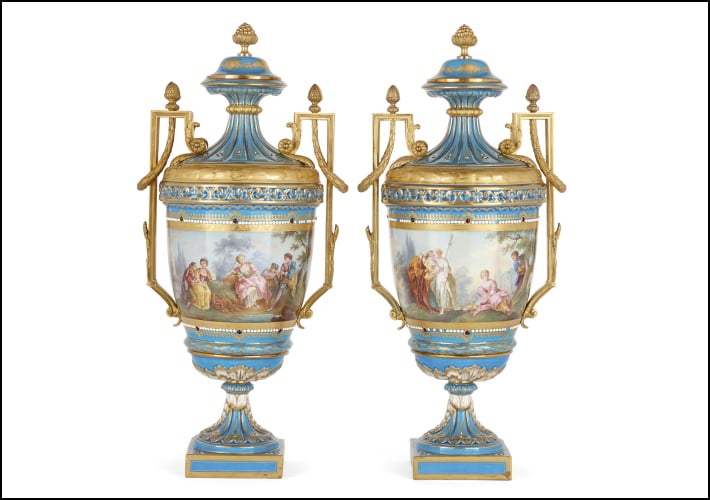 While the porcelain is distinctively Rococo in style, the mounts are definitively Neoclassical in this beautiful pair of late 19th Century vases.

The pair of vases illustrated above demonstrates well this form of stylistic melding. The porcelain vases, classical in shape, are decorated in the manner of Sèvres, with painted scenes whose compositional provenance belongs to the mid-eighteenth century. The vases, however, are mounted with Neoclassical style ormolu handles, the spare linearity of which contrasts with the sumptuousness of the porcelain, revealing the eclecticism of late nineteenth century decorative art. 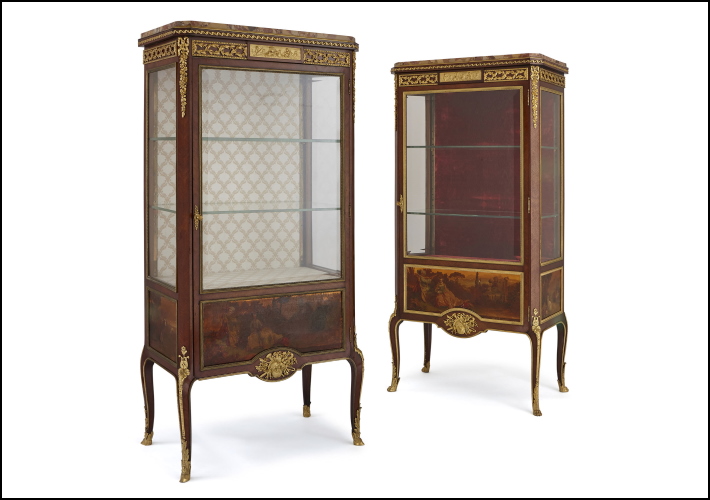 The curving cabriole leg, strongly associated with the Louis XV style, is paired with linear Neoclassicism in this pair of vitrines by Linke.

The pair of vitrines pictured above, by the celebrated ébéniste François Linke, is eclectic in several respects. The gently curving cabriole legs refer to Louis XV style furniture of the mid eighteenth century, while the rigid, geometrical frames of the cabinets recall Louis XVI style Neoclassicism, in which Rococo curves were gradually replaced by linear forms.

Furthermore, the ormolu mounts are distinctly Neoclassical—Vitruvian scrolls, intertwined vines, and mounts composed of assemblages of objects being staples in Louis XVI style furniture. The body of each vitrine is decorated with vernis Martin style lacquerwork, a form of ornamentation especially popular in the middle of the eighteenth century when the Rococo held full sway in France.

Linke is thus referring not only to a transitional style—to the overlapping moment between the Louis XV and Louis XVI tastes—but he is also actively creating an aesthetic amalgam of a variety of forms, shapes, and decorative techniques, each of which flourished during markedly different eras of French history.

With the Meiji Restoration of 1868, Japan fully opened itself to the Western world, and its art and culture seeped into European thought and influenced its fashions, proving to be one of the most forceful aesthetics acting on European art during the final decades of the nineteenth century.

In France, Japonisme—the taste for distinctively Japanese art and design—emerged during the reign of Napoleon III and flourished into the Belle Époque. The influence of Japan is seen not only in the popularity of Japanese gardens and in painting, where artists such as Whistler and Gauguin championed its teachings, but also in the decorative arts. 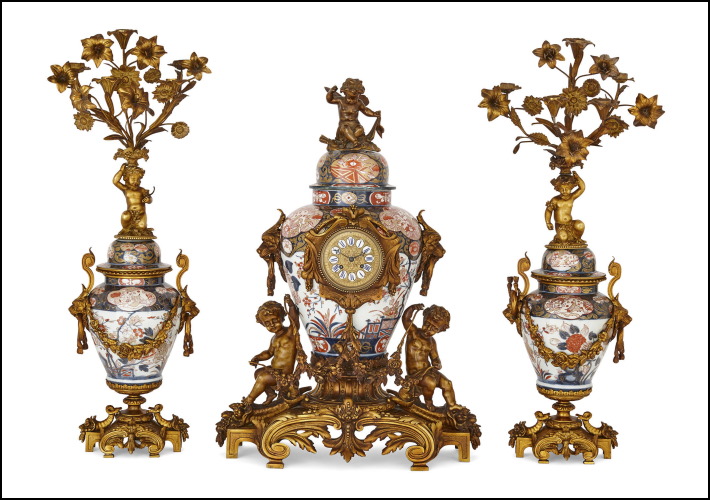 The above garniture is a superb example of Japonisme while also being demonstrative of late nineteenth century French eclecticism. The Imari porcelain used in the set is Japanese in origin, but the ormolu mounts are French and were added to the porcelain in a French atelier.

In this set, the beautiful, distinctively Japanese porcelain finds resonance with the largely Rococo style ormolu mounts. Draped ormolu garlands mirror the painted floral sprays that adorn the porcelain, while the elaborate candelabra with their intensely floral light branches further stress this point.

The cherub motif that defines much of the ormolu may seem incongruous with the abstracted Japanese aesthetic, but the combination of styles is entirely successful. 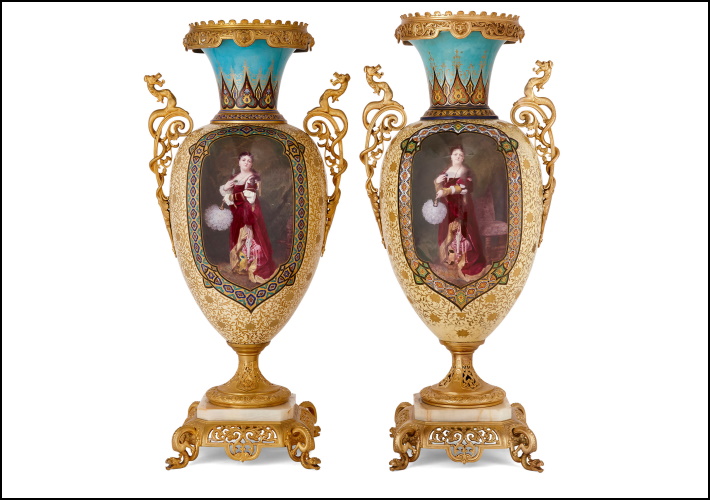 While the mounts demonstrate Chinese influences, the painted scenes on these vases are reminiscent of seventeenth-century European painting, making this pair of vases an eclectic duo.

At the same time as the taste for the Japanese aesthetic and its products became fashionable in French society, so did the desire for the products of China, and Japonisme was accompanied by the Chinoiserie.

The pair of vases illustrated above is a wonderfully eclectic duo, merging aspects from several historical European styles with newly fashionable eastern forms.

The shape of each vase recalls Classical Greek amphorae, while the idea of porcelain painted with figurative scenes is reminiscent of eighteenth-century French decorative art. The form of the portraits and the sombre colour palette employed, however, is closely associated with seventeenth-century Baroque painting.

Most strikingly, the ormolu mounts are evocative of Chinese forms—particularly the twin scrolling dragon handles. Finally, the surface of the porcelain, with its gilded scrolling foliage is rooted in the arabesque, a motif closely associated with Islamic art and design.

During the period of Napoleon III and the subsequent Belle Époque, eclecticism in the decorative arts incorporated styles beyond the recently French (that is, older than the Rococo or Neoclassicism). Tastes and techniques that flourished during the long Renaissance and the Baroque found favour once again. As mentioned above, the Baroque penchant for gilding was equalled by the late nineteenth century French love for golden surfaces, but the revival of Renaissance and Baroque forms, methods, and materials goes beyond gilt surfaces. 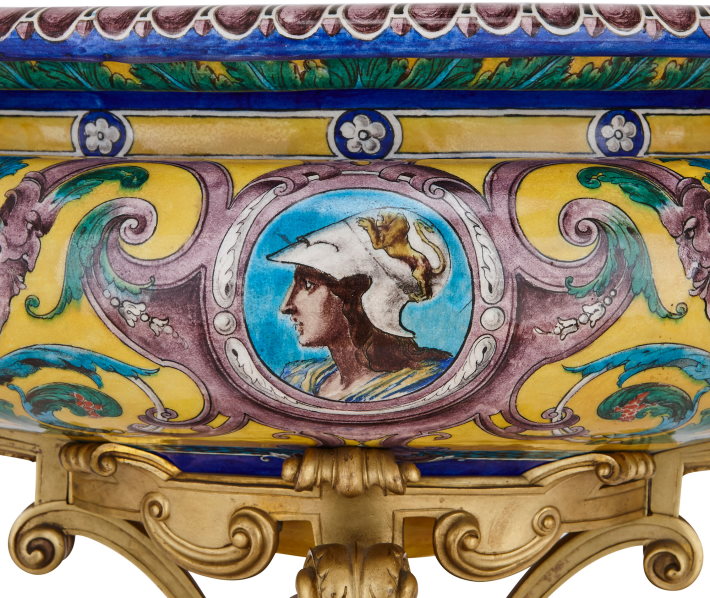 Porcelain painted in imitation of sixteenth century style Italian majolica is paired with Neoclassical style ormolu mounts in this garniture by Dasson.

The above illustration depicts the jardinière from a three-piece centrepiece garniture by the esteemed French maker Henry Dasson. The ormolu mounts that adorn the set are largely Neoclassical in nature, with grotesque masks, acanthus leaves, and clean curves and scrolls constituting much of their form.

The porcelain, however, is more unusual. Dasson’s porcelain is imitative of Italian majolica (or maiolica), a type of tin-glazed ceramic rooted in antiquity that was especially popular during the sixteenth century. The rich yellow ground and the loosely painted scrolling foliage recall sixteenth century Italian originals, while the painted profile of the solider is distinctly Classical in form, reminiscent of Ancient Roman coins. 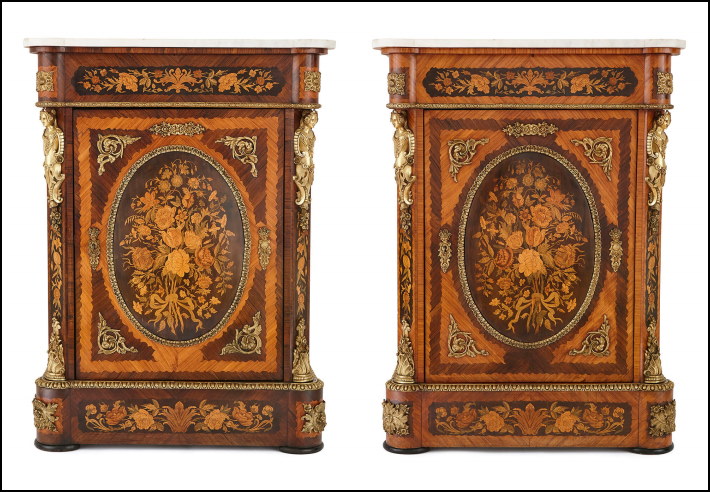 The ancient art of marquetry, revived during the sixteenth century in Florence, again found favour in late nineteenth century France, as demonstrated in this pair of cabinets.

Marquetry, like majolica, is rooted in antiquity, and like majolica it enjoyed a revival in sixteenth century Italy, most notably in Florence and Naples. The art of veneering wood with pictorial scenes was brought to its pinnacle by the ébenisté André Charles Boulle, who flourished under the reign of Louis XIV. Boulle, however, employed brass, pewter, and tortoiseshell to compose his scenes; in contrast, the above pair of late nineteenth century cabinets rely solely on inlaid wood veneers.

Each cabinet in the pair is set with rather unusual ormolu mounts. The espagnolettes appended to each top corner are antiquated in appearance, the females’ faces and style of dress belonging perhaps to the sixteenth or seventeenth centuries.

The ornamentation of the cabinets satisfies the urge to eliminate empty surfaces—horror vacui—that characterises much of late nineteenth century French decorative art, but does so using techniques and forms that are several centuries old by the time of their creation.

The period between the rise of Napoleon III in 1848 and the First World War in 1914 was an essentially eclectic one in French decorative art. As this blog has demonstrated, artisans, ceramicists, and furniture makers incorporated a wide variety of styles, techniques, and modes of ornamentation into their products.

The result is an aesthetic that appeals to us today for its rich variety, its sensual beauty, and its endless detail.