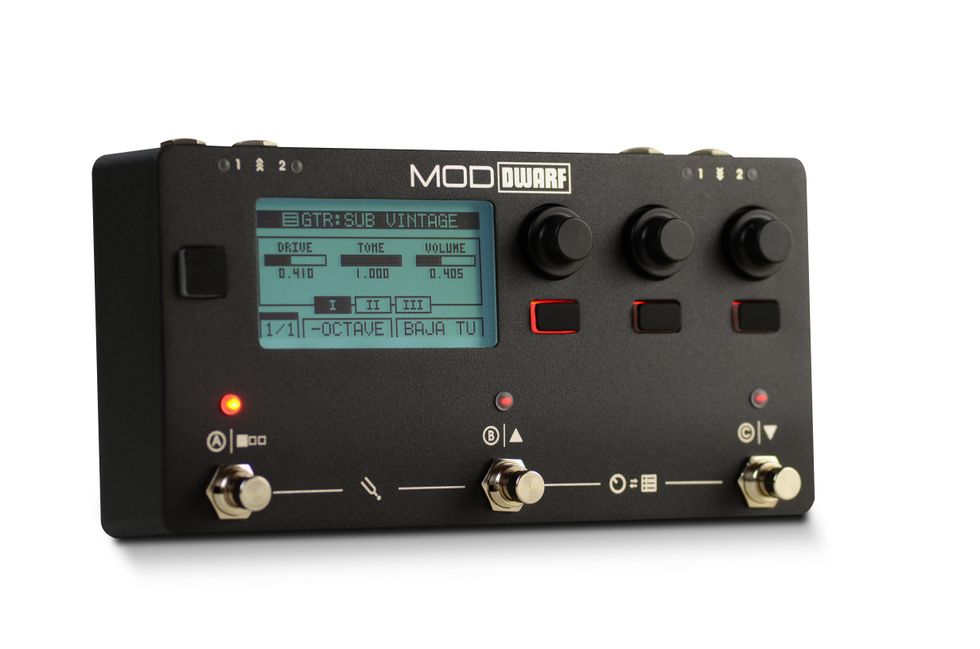 MOD Devices newest stompbox wunderkind brings creative power, ease of use and incredible flexibility to guitarists and instrumentalists looking for a complete audio processing toolkit. With a sound that is rich and diverse, the Dwarf unlocks creative potential, with a near infinite approach to sound sculpting. Following a successful Kickstarter campaign of the MOD Dwarf, funded in less than 24 hours, MOD Devices has garnered excitement and support from the early adopters community, artist supporters and media previews. The device has been heralded as a gamechanger for all walks of modern musicians and DJ’s.

The MOD Dwarf offers all the flexibility of a DAW, with the convenience and toughness of a standalone device in a compact, gig friendly footprint. It features two independent audio channels, each equipped with independent gain controls, USB-MIDI, and Mini MIDI Jacks for seamless live performance and studio applications. Three fully assignable knobs, three footswitch, and three push buttons, make the MOD Dwarf a flexible powerhouse at your feet or your fingertips. If that’s not enough, the MIDI learn function allows the unit to be manipulated by any class-compliant controller in the market.

With its straightforward guitar pedalboard based patching system, MOD users have access to more than four hundred free and commercial plugins at the MOD Plugin Shop, created by independent and renowned developers. All the plugins can be patched with matchless flexibility using the browser-based a visual interface that allows the user to split, join and even feedback signals in a modular fashion. All the creations can be saved, uploaded to the cloud, and used anytime without the necessity of a computer. Supported by a strong open-source community, the gallery is always growing.

MOD Dwarf at a Glance

Tying this together is a system wide OS update released in Q1 of 2021 that brought multiple new features to all devices including the Duo, Duo X and Dwarf, most notably to new capacity to process user files like IRs, samples and loops. A new MOD OS release with additional features is to be released this quarter. It will include Stand Alone patching, which will liberate the device from patching with an external GUI link.

“The MOD Dwarf represents a big leap forward in our product portfolio while still conserving in its DNA the community spirit from its predecessors. After such a successful crowdfunding journey, it is exciting to receive such positive feedback from first users and reviewers, giving us the confirmation that we are on the right track and that the MOD Dwarf has a game changing potential in the musical gear landscape.”

“For the design of the MOD Dwarf, we could draw from more user feedback and learnings than ever before as well as on latest technology. As a result it’s easier to use, more powerful and compact then the Duo. And it’s more affordable at the same time.”

NYC ‘Homecoming’ Concert Shut Down Due to Inclement Weather

NYC 'Homecoming' Concert Shut Down Due to Inclement Weather