Genesis ‘Turn It On Again’ at Emotional Tour Launch in Birmingham


When the lights dimmed at Birmingham, England’s Utilita Arena on Monday evening and Genesis walked onstage to kick off their long-awaited The Last Domino? reunion tour, it was hard not to feel just a little trepidation. It had been 14 years since they’d played even a single song together in public, and in that time Phil Collins suffered significant health setbacks that left him frail and unable to play the drums or even stand for extended periods of time. The show was the first of their three Birmingham concerts that launched the band’s tour.

He sat passively in a chair perched in the front of the stage while the band, which now includes his 20-year-old son Nicholas on drums, launched the show with the 1980 instrumental “Duke’s End.” But then they transitioned into “Turn It On Again” and all doubts about the ability of Collins to front the band melted away by the time the first verse was over. He may not have the vocal range he had in 1987 or even 2007, but he can still project with real power and conviction (no easy feat from a seated position for any vocalist), and his charisma is undiminished.

The “Duke’s End”/”Turn It On Again” double shot was the start of a delicate balancing act that continued through the whole evening where they tried to satisfy fans of their pop hits and the smaller (but far more vocal) segment that prefer their more complex prog tunes. That’s tough since “Invisible Touch” and “The Lamb Lies Down on Broadway” sound almost like the work of two completely different bands, but they actually found a way to make it work. The end result was one of the most satisfying reunion concerts by any band in recent memory. 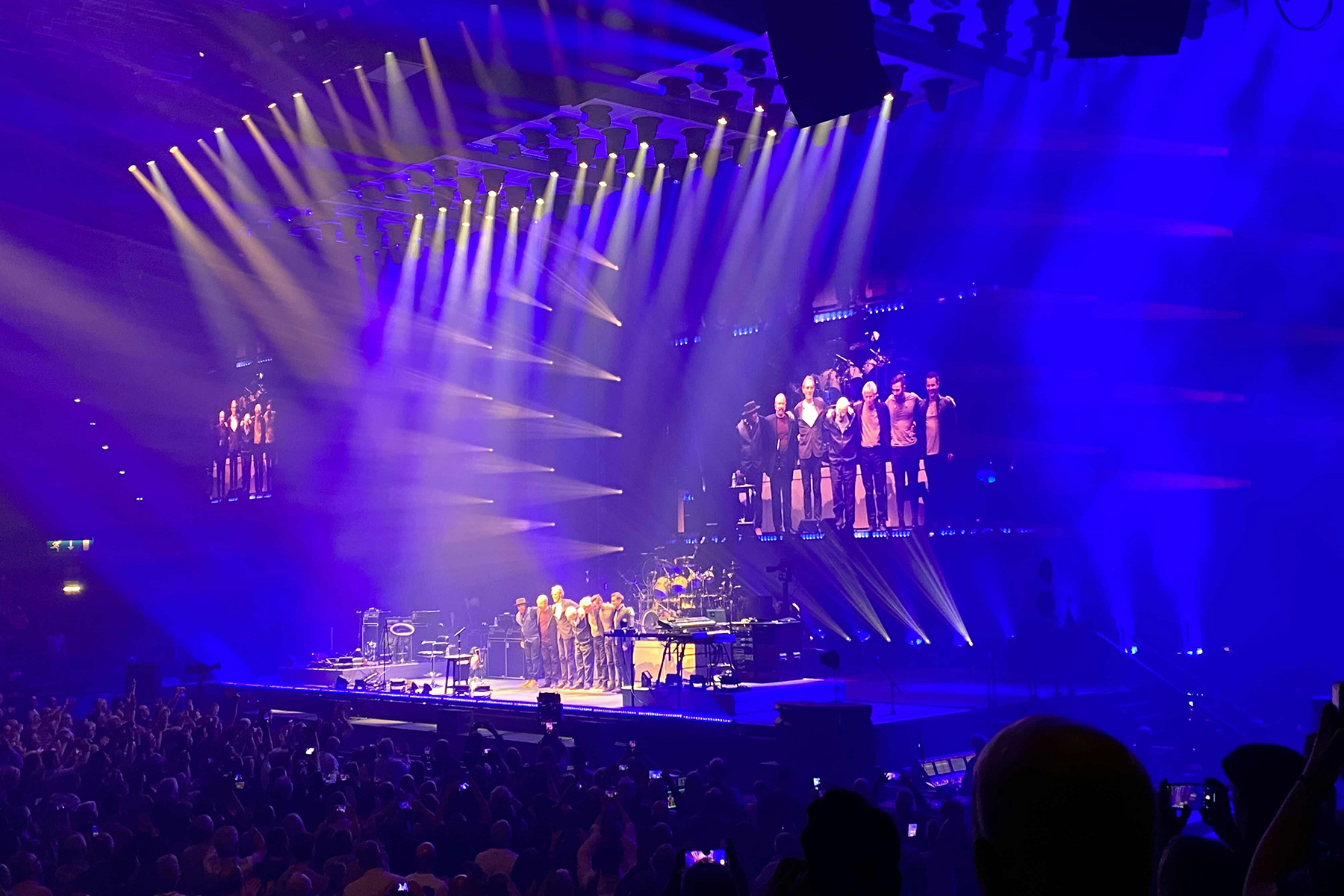 None of it would have worked if Nicholas Collins hadn’t developed the ability to play his father’s parts with remarkable precision. He’s the exact same age Collins was when he joined the band, and the mixture of DNA and years of work in his solo band have paid off in incredible ways. There were moments where Phil walked to the drum riser to watch him play an instrumental passage from up close, and his fatherly pride was clear to everybody in the arena.

Nicholas Collins is the backbone of this new incarnation of Genesis that also includes founding members Mike Rutherford and Tony Banks, and longtime touring guitarist Daryl Stuermer. In a Genesis first, backup vocalists (Daniel Pearce and Patrick Smyth) were added to the mix to help Collins with some of the higher notes, though they only appeared on select songs and were quite unobtrusive.

The tour was originally supposed to begin in November 2020, but the pandemic forced them to delay it first to April 2021, and finally to this month. “It’s been a long time coming,” Collins said early in the night. “We know it’s been a difficult couple of years for everybody here, and those at home. But we finally made it, and we’re going to have some fun tonight.”

That fun included expected radio hits — such as “Land of Confusion,” “Invisible Touch,” “No Son of Mine,” “Throwing It All Away,” and “Tonight, Tonight, Tonight”  — along with longtime concert staples “Home By The Sea” and “Domino.” But there were also some very unexpected diversions. There was the Duke deep cut “Duchess” (unplayed since 1981), and an acoustic mini-set (a Genesis first) that included “That’s All,” “Follow You Follow Me,” and a radically reworked “The Lamb Lies Down on Broadway” that stripped away the keyboard intro and anything even remotely prog. It was “The Lamb” for coffee shops and the only real misstep of the night.

Per longstanding tradition, songs from the Peter Gabriel era were largely relegated to instrumental medleys, and only the truly faithful in the audience were likely able to discern the bits of “The Cinema Show,” “In That Quiet Earth,” and “Firth of Fifth” sprinkled throughout the set. But they did play a full version of “I Know What I Like (In Your Wardrobe),” complete with a brief, seated version of Collin’s old tambourine dance routine.

Genesis have been pushing the boundaries of stage design since their earliest days with Peter Gabriel, and this was a particularly impressive setup with a movable lighting rig that looked like giant dominos, and a screen that showed new animations for many of the songs, including a horde of angry, masked protestors during “Land of Confusion.”

The encore opened with an inevitable “I Can’t Dance,” and in the most jarring transition of the night, they followed it with the opening verse of 1973’s “Dancing With the Moonlit Knight.” It was the first time Collins had sang a note of the song since the Jimmy Carter administration, and it flowed right into a singalong rendition of “The Carpet Crawlers” from The Lamb Lies Down on Broadway.

That would have been the emotional high point of most Genesis shows, but that actually came much earlier in the set when they dug out “Fading Lights” for the first time since 1992. The fantastically obscure song wrapped up We Can’t Dance, and was essentially Collins saying goodbye to his Genesis bandmates, and their fans.

“Another time it might have been so different,” Collins sang. “Oh, if only we could do it all again/But now it’s just another fading memory/Out of focus, though the outline still remains.”

He was merely age 40 when he wrote those words, and they carried a very different emotional weight when he delivered them in his current physical state at age 70, joined onstage only by Banks and Rutherford for the opening verse.

Collins has said he has no intention of playing with Genesis again after this tour. And unless miracles happen and Peter Gabriel returns at some future date, that means the group is done when this tour is done. But few fans could have expected a final tour this magnificent, and it’s just getting started.

“Duke’s End”
“Turn It On Again”
“Mama”
“Land of Confusion”
“Home by the Sea”
“Second Home by the Sea”
“Fading Lights”
“The Cinema Show” (instrumental portion)
“Afterflow”
“That’s All”
“The Lamb Lies Down on Broadway”
“Follow You Follow Me”
“Duchess”
“No Son of Mine”
“Fifth of Fifth” (instrumental portion)
“I Know What I Like (In Your Wardrobe)”
“Domino”
“Throwing It All Away”
“Tonight, Tonight, Tonight”
“Invisible Touch”
(Encore Break)
“I Can’t Dance”
“Dancing With the Moonlit Knight” (first verse)
“The Carper Crawlers”

Plan a quad trip in Gaspésie

Plan a quad trip in Gaspésie