“We heard the Eagles were playing Hotel California next door in the forum and we’re going to do the same with Satanic Majesty’s – just kidding! ”A playful Mick Jagger teased the sold-out crowd at the huge SOFI Stadium on the second night of their LA run. He also stated that “they also ran out of acid”. The almost eighty-year-olds who were known as “The World’s Greatest Rock n Roll Band” in the last few decades have this kind of relaxed atmosphere and fun on this “No Filter” tour.

What else can be said about the Rolling Stones that has not yet been said? They seem to have been around forever, their song catalog, stage and production are exceptional, and despite the death of drummer Charlie Watts at the tender age of 80, they are regrouping and delivering as always. Singer Mick Jagger can still strut and prance as he has done since the mid-1960s, guitarists Keith Richards and Ronnie Wood are still grinding the dirtiest licks in the industry and fans flock in spite of astronomical ticket and parking prices.

Whatever keeps it going was once again seen for two nights in the brand new and colossal SOFI Stadium, which, yes, next to the aforementioned Fabulous Forum, has been the scene of so many Stones performances over the years. The venue, home of the Rams and Chargers professional soccer teams and the 2022 Super Bowl, is incredible. The halls are so big that King Kong could lose himself in the crowd. The sound and lights are clear and fabulous. As you can imagine, food and drink are expensive but there is plenty of choice. There are many ramps and areas that meet accessibility standards. Tonight, COVID-19 restrictions were in place and enforced and masks were required indoors, but as the night raged things relaxed, as did the band. 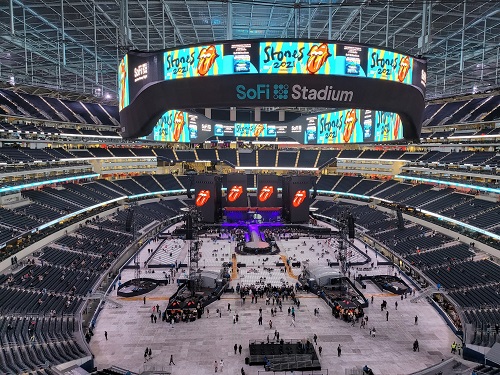 As for the show, let’s just say everyone got their money’s worth. After a spirited opening set by The Glorious Sons from Canada, the stage was clear. At around 8:48 pm, a huge, deafening roar greeted the Rolling Stones and they kicked off with the 1968 protest song “Street Fighting Man”. Jagger got to work right away and did what he did best. Strutting around, ambushing for the crowd, waving his arms and moaning the lyrics to songs he wrote and performed when he was nearly 50 years younger, in the same key! The whole time he was navigating what appeared to be a kilometer-long stage, sometimes at full sprinting pace. As they say, “Whatever you gave him, I want something!”

A real treat for me was the performance of “All Down the Line” from my favorite Rolling Stones LP from 1972 Exile on the main street. Like many in the crowd, I was instantly transported back to the point in my life when it was my favorite record in my collection. And the band did it. The biggest change in this part of the tour is of course the fact that drummer Charlie Watts is not there. Drummer Steve Jordan is the PERFECT person to drum for the Rolling Stones now that Watts has passed away. In fact, a few years ago I was in a discussion with someone on this very subject, and I mentioned their name then, and I stand by it now. Apparently the band agreed, as did Watts when he first fell ill. Jordan, wearing an orange turtleneck and big sunglasses like a young Stevie Wonder, was, as we drummers say, “in your pocket” all night. His backbeat not only drove the band’s songs forward, but at times mimicked Watt’s swinging style to perfection.

Jagger thanked The Glorious Sons before leading the band to a few more favorites of mine – “19th Nervous Breakdown,” which featured bassist Darrell Jones playing the Bo Diddley-style bass note figure after each chorus originally dated late Stones guitarist Brian. Jones was composed when they recorded it in 1965. Next came the classic “Tumbling Dice”, another from Exile on the main street. Ronnie Wood added so much to the original version of Mick Taylor through his slide guitar work. It blended in seamlessly with what Keith Richards did throughout – to me, this is the true Rolling Stones sound. Not quite, blues, not quite honky tonk, just something in between. 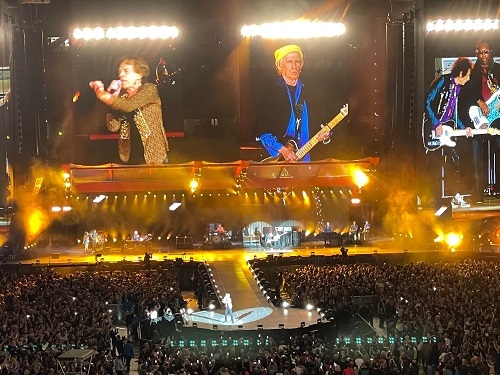 Jagger turned to the audience again: “I haven’t played this for a while, I hope everything goes well” – and the band wowed the audience with a spirited version of “Beast Of Burdon” from 1978 Some girls LP. The lighting director used the house lights to trick the crowd into singing the “woo” parts of the song, while longtime backing vocalist Bernard Fowler stepped in front and sang the word “never” with Jagger as part of the chorus.

Jagger also mentioned that the night was special – someone had told him it was the exact date of the night he and Keith Richards met at a train station 60 years ago. Kind of cool when you think about it … and everything that has happened since then.

The band did something great there. Each evening of the tour they choose a song from a list of online inquiries. Supposedly they don’t know which one until it is flashed on one of their huge video screens. Tonight it was 1971 “Wild Horses”. Unfortunately, there was a slight delay in his performance when Jagger pointed out, “We have 75 guitars backstage and can’t find the right 12-string.” They never did, but the band kept playing with Richards and used a six-string instead Fender Telecaster. It worked well. 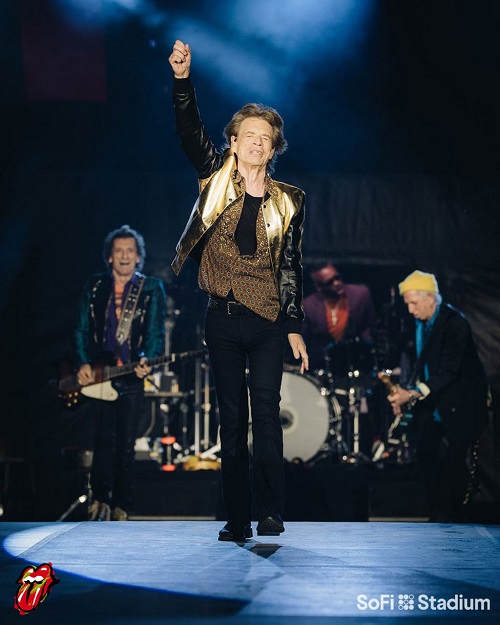 “Do you feel like singing a little?” Jagger asked the crowd before leading the band on an expanded version of “You Can’t Always Get What You Want”. He used every inch of the long ramp that extended into the crowd to get them to sing along, and of course they did exactly what he asked. The drunk guy next to me even had the boldness to invent his own key to sing along to and then showed off his drunken waltzing skills. You have to love being on a live rock show. The band even stepped up the booming number a bit and doubled the coda thanks to Steve Jordan’s wonderful drumming and band director and pianist Chuck Leavel’s spirited keyboard mastery.

The Rolling Stones’ current single “Living In A Ghost Town” from 2020 was a pleasure to hear live, in contrast to the dubbed “Start Me Up” that followed. Soon the famous cowbell from the classic “Honky Tonk Woman” rang through the stadium and the band rocked the song like it was in 1969. Jagger was amazing, he navigated the huge ramp and both sides of the stage, sometimes running at full speed while you sing the song in its original key. Again he is 78 YEARS OLD!

Then it was time for Glimmer Twin guitarist Keith Richards to take center stage. To someone ridiculed for still alive after all the abuse they inflicted on themselves, they looked healthier than I’ve seen them in years, complete with a wink and obviously amused. With a slightly tilted yellow cap and a selection of satin shirts, he looked like an old merchant marine who had found himself in the closet of a “fancy women” in one of the many ports he had visited. 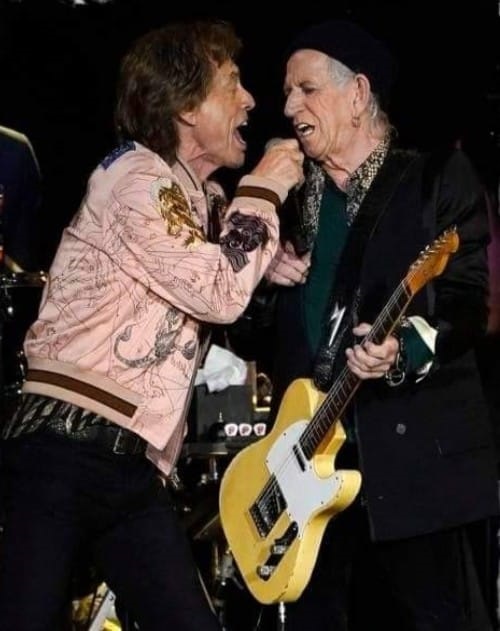 After mumbling something to the crowd, he happily took over the lead vocals on two songs – the seldom-played ode to airport delays “Connection” from 1967, followed by “Before They Make Me Run,” another of Some girls. “Keef” is a rock star like no other. Unique. He really is the “rock” of rock n roll in my book. Jagger then joined him on guitar on “Miss You,” the biggest hit of Some girlswho have focussed on Darrell Jones’ big fat bass guitar that powers this popular disco-era song.

Jagger showed his harmonica skills during the longest song of the night, the bluesy “Midnight Rambler”. With its many tempo changes, the show showed how versatile the band can be. “This is our 49th show in Los Angeles!” Exclaimed Jagger, sharing some interesting facts about Stones with his starry crowd.

The band, which was covered by a huge lighted plastic tarpaulin, started with “Paint It Black” while the audience swayed and rocked to Jordan’s throbbing drum beat and Wood’s imitation of the sitar tone of the original recording. Jagger pranced and stuttered while singing the 1966 song aftermath LP.

This was followed by the percussion intro to “Sympathy for the Devil”, which signaled to many of us that the show was nearing the home stretch. Jagger appeared in a shiny coat and tails and navigated the long ramp like a conga dancer. The fiery graphics on the huge video screens behind him helped add to the creepy atmosphere. It seemed as if everyone was dancing in the sold-out stadium and singing the songs “Wootwoos” like an extended choir group in the background. 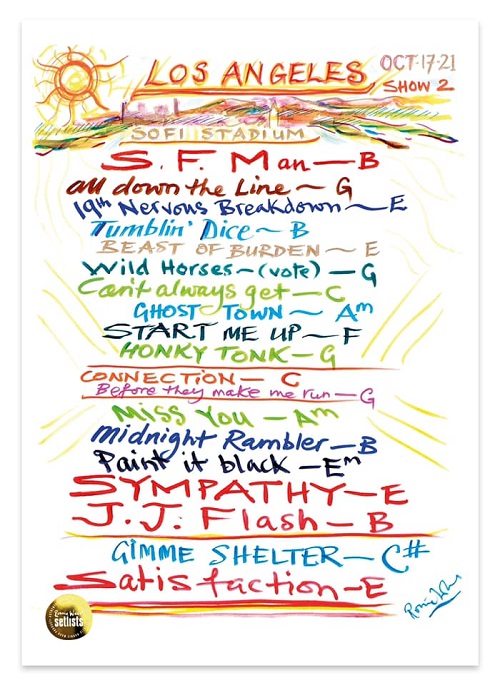 The Stones ended their set with the obligatory “Jumpin ‘Jack Flash” before briefly stepping off the stage. The building rocked with applause as backing singer Sasha Allen performed and channeled the gospel-like intro from original singer Merry Clayton to “Gimme Shelter”. She was the center of attention during the song’s coda as she strutted the long ramp and sang her heart out, “Rape. Murder. It’s just a shot away. ”In her silver fringed dress, vintage Tina Turner was remembered while the other members of the fabulous Rolling Stones grinned and rocked this classic.

With the obligatory “Satisfaction”, the band ended the evening’s celebrations, which were attended by many spectators, from toddlers in their parents’ arms to seniors in wheelchairs and walkers waving their arms and singing along. Lots of air guitarists filled the aisles, and the predominantly Caucasian crowd wearing their new $ 50 Rolling Stones t-shirts brazenly tried their best “Moves like Jagger” dance routines, united as a unit and all enjoying these rock and roll Legends. A short fireworks display crowned the evening.

For many it was the first time they saw the Stones; for many – to paraphrase a line from the Rolling Stones’ huge song catalog – “This could BE the last time. Maybe the last time, I don’t know. ”We’ll see. My thanks go to those who made it possible for me to participate. As always, my thanks go to the band. “It’s just rock n roll, but I like it!” 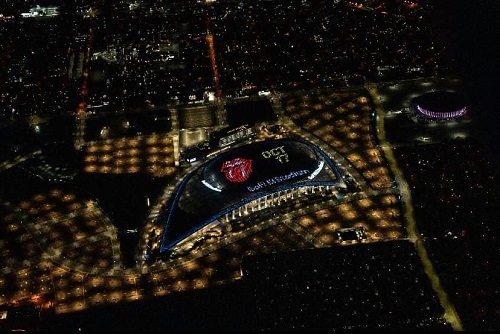