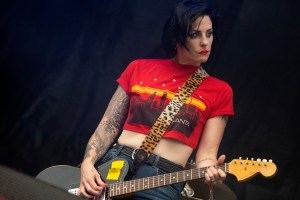 Brody Dalle, of The Distillers, performs on stage at Shaky Knees Music Festival on Saturday, May 5, 2018, in Atlanta.

Brody Dalle, founder of the Los Angeles punk group The Distillers, was found guilty of one count of criminal contempt Friday for “failing” to turn over her youngest son to ex-husband Josh Homme, frontman of Queens of the Stone Age, for his allotted custodial time.

Los Angeles County Superior Court Judge Lawrence Riff found Dalle guilty of “willfully” violating a Sept. 1 court order when she didn’t deliver the 5-year-old child to Homme on Sept. 3. But in a split ruling, he acquitted Dalle of a similar count related to the couple’s older 10-year son, saying he believed the older boy resisted the visit on his own. And he let Dalle off the hook for two more counts alleging she deprived Homme of video calls.

After the verdict, Homme asked to address the court. “I followed every single order you gave. Why did I do that?” he asked Judge Riff.

“I know how disappointed you are, and I know you think this system has let you down,” Riff responded, referring to the fact Homme hasn’t had custody time with his eldest son since August.

“Everybody here has gotten a serious tutorial in criminal law. Criminal law is not the answer to a family’s problems,” Riff said. “What you really need to be focusing on is how in this current fractured environment you’ll be able to co-parent. And you’re going to need help. You’re going to need third parties involved. If you can get there, you’re going to heal this family. But doing it through contempt proceedings and DV [domestic violence restraining order] proceedings probably is not the answer.”

Both parents took the witness stand during the contentious trial that started Oct. 29 at Homme’s request.

“To pretend we’re dealing with anything other than willful conduct is a joke,” Homme’s lawyer Glen Jonas said in his closing argument Friday, calling the children “pawns in mother’s game of vindictive parental alienation.”

In his own testimony and sworn statements, Homme conceded his relationship with the ex-couple’s 15-year-old daughter had broken down — she was granted a restraining order against him Sept. 7 — but he claimed his custodial time with his sons over the summer was generally positive and he didn’t believe the boys heard him disparage Dalle to her face at a prior handoff, as Dalle has claimed.

For her part, Dalle testified that she tried to get the boys to visit their dad, but they refused. Dalle said she unblocked Homme’s phone number in the children’s phone, packed their bags for the visits and even told them she might go to jail if they didn’t go see their dad.

Dalle’s lawyer Lisa Helfend-Meyer claimed in her closing argument that Homme alone was responsible for his estrangement from his kids. She said Homme played “emotional mind games” with the children when he allegedly punched Dalle’s car, called her names and allegedly threatened to kill her boyfriend.

The contempt trial marked the latest turn in the ex-couple’s turbulent split. In prior hearings in the case, Riff ordered round-the-clock, court-appointed monitors in each parent’s home during custody visits. He also dismissed restraining order petitions filed on behalf of the boys Sept. 8.

Though the boys’ paperwork included what looked like Dalle’s signature, she revealed during the trial that she did not sign the paperwork and was not even present when the petitions were filed in a courthouse in Santa Monica without the boys present.

“I had nothing to do with it,” Dalle testified Nov. 9, saying it was her boyfriend, Gunner Foxx, who drove her teen daughter to the courthouse to file the paperwork for the boys.

Top 5 – Microbreweries to discover this winter in Gaspésie

Peter Jackson’s Beatles Docu-Series ‘The Beatles: Get Back’ Coming to Disney+ I THR News

Peter Jackson’s Beatles Docu-Series ‘The Beatles: Get Back’ Coming to Disney+ I THR News

How to Bleach Pinecones – A Beautiful Mess