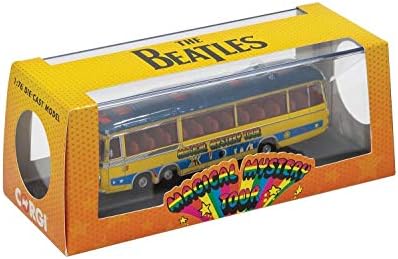 The Beatles released the Magical Mystery Tour album in 1967 to accompany the film of the same name which was first shown in the UK on Boxing Day. The record proved a huge success, had multiple weeks at number one in the charts in multiple countries and was nominated for Album of the Year at the 1968 Grammy Awards. The re-release of this replica of the Bedford VAL used in the film is meticulously detailed and will appeal to both die-cast and Beatles collectors alike. 2018 Apple Corps Ltd. All rights reserved. A Beatles product licensed by Apple Corps Ltd. Beatles is a trademark of Apple Corps Ltd. Apple and the Apple logo are exclusively licensed to Apple Corps Ltd.
The Fab Four from The Beatles, John, Paul, George and Ringo, known for the quirky and lovable movies and their world wide musical success through the decades goes unmatched.
The model is the perfect size as a desk or shelf ornament. Makes a perfect gift for any person who loves The Beatles!
Comes in sturdy display box with clear window to keep as a collectible or take out of the box to display or play!
Corgi is a premier line of highly detailed die cast products that has been arround for over 50 years and features aircraft, space crafts, tanks, trucks, emergency vehicles and buses.

, Guitarist Chris Eldridge joins us on this week's podcast to talk about the new Punch Brothers album. Hell...

From Boring Afternoon Photos to Fine Art Black and White

The History of the Engagement Ring