While they’re primarily considered a rock jam band, there’s no denying that Gov’t Mule does indeed have signature blues roots. After all, their leader, singer / guitarist Warren Haynes, was a long-time member of the Allman Brothers Band.

But it wasn’t until late 2021 that Gov’t Mule managed to fully embrace the blues – with the arrival of their eleventh studio album. Heavy duty blues. And while the album includes covers from such renowned artists as Howlin ‘Wolf, Elmore James, Ann Peebles, Bobby “Blue” Bland, Junior Wells and The Animals, it also includes a handful of original songs that perfectly match the sound and mood of the classics.

Haynes spoke to vintage rock shortly after the album was released (which debuted at # 1 on the Billboard Blues Albums Chart) and just weeks before Gov’t Mule would wrap up the year with live performances.

Let’s talk about the new album Heavy load blues. What made you decide to record a blues album at this point in your career?

This was our 11th studio album for Gov’t Mule. And I think we’ve got to a point in our careers where there’s something we haven’t done or I haven’t done, it’s a good time to check it off. I’ve been talking about making a blues record for five or six years, and that’s what comes up in interviews. I think throughout the whole COVID lockdown thing it was pushed to the fore and seemed like the right time to do it. Blues influenced me and Gov’t Mule so much from the start, but we’ve never made a traditional blues record – blues of all things.

How did the idea come about to make a mixture of originals and covers out of it?

I’ve been making a list of cover songs for several years – cover songs that I thought would be nice when the time came to try them out in the studio. I didn’t expect to write as many original blues songs as I actually did because I’ve written hundreds of songs, but I don’t write many of what I call “traditional blues songs”. But over the last couple of years I’ve written five or six that fall into that category, which convinced me that the time has come for it and that the right approach is to do half original songs and half cover songs.

I love the broader ones – like “Snatch It Back and Hold It” that fades into a jam in the middle that we call “Hold It Back”. I love “I Asked Her for Water” – probably the longest song and the toughest performance on the album. It also happens to be the first song we recorded from the record. But I also love the acoustic songs – “Heavy Load” and “Black Horizon” both turned out really cool. I’m very pleased with the ballads we were able to achieve – including as many different types of blues and approaches to blues as possible. It really goes all the way, but within the parameters of the blues.

What are some of your favorite blues artists and albums?

For this album I mainly wanted to revise artists that we hadn’t covered in the past. Since we had covered Robert Johnson and Son House in the past and also played a show at the Beacon Theater where we did a “Tribute To The Three Kings” – Freddie King, BB King and Albert King – I had the feeling that we didn’t necessarily have to include any of these people. And since there are so many giants on this list, I thought, “Let’s do Elmore James, Howlin ‘Wolf, and Bobby’ Blue ‘Bland.” And we picked a track by Junior Wells and Buddy Guy. These are all of my favorite blues artists. We have already covered Muddy Waters on stage and you can find a Muddy Waters track on the bonus CD of the deluxe version of the album. As for an album, I always tell people that there is this Willie Dixon box set, that is The chess box, that’s two CDs with all the wonderful blues artists covering Willie Dixon’s songs. And that covers so much Floor – it’s really amazing. Many of the live recordings – Albert King: Live wire blues power, BB King: Live on the shelf and Live in the Cook County Jail. But also, Freddie King: The burglar is one of my favorite blues records. All the Real folk blues Series stuff that came out as compilations a few years ago, many of which were originally released on singles – Sonny Boy Williamson, Howlin ‘Wolf, Muddy Waters, and the like – and they put them together and released these fantastic compilations called together Real folk blues. There’s a Magic Sam record called Westside Soul that’s really good. There are tons – these are just a few in my head.

I think it’s more alive and better right now than it has been in the last couple of decades. There seems to be a resurgence in the people really digging it and more young artists performing it. There are some really good young blues artists out there right now, and it’s nice to see. It’s good to see the blues take off.

There is this kingfish [Christone Ingram] who is doing really well. And there is this woman named Celisse Henderson who is a great player and a great singer. Both are really turning their heads now.

Are the upcoming year-end shows considered part of the Christmas Jams performances you’ve done in the past?

No, we have a tradition of New York City’s Beacon Theater performing on New Years Eve. We always spend several nights there. This year we’ll be playing at the Met in Philadelphia on December 29th and then at the Beacon on December 30th and 31st. And the 31st always turns out to be one of our thematic shows – where we do something different. The theme can be anything from the cover of a classic album to the cover of a classic artist to putting together a playlist of songs that all have a common denominator. But we’ve been doing this for more than a decade. It’s similar to our Halloween shows where we just did our Halloween shows – which we just did in Atlanta this year, two nights at the Tabernacle. And on the first night we played the new record Heavy load blues, in its entirety for one sentence. And then another Gov’t Mule set follows. And the second night we opened with a Gov’t Mule set and ended with a tribute to them Allman brothers: Live at Fillmore East – celebrates its 50th anniversary. And we had our friends Charlie Starr from Blackberry Smoke and Paul Riddle from the original Marshall Tucker Band on this set. We do these themed shows twice a year, and we’re very much looking forward to the ones that come out later this month.

Let’s discuss your place and legacy in the Allman Brothers Band.

I was honored to join the band in ’89. At the time we thought it was just for a tour – we went on a tour to celebrate the 20th anniversary. And the band just had a boxing set called. released Dreams – that was a nice career anthology back then. Things were going well. We did a second year, a third year, a fourth year … it just went on. I spent 25 years with the Allman Brothers. And it was just fantastic. It was an opportunity to be in one of the greatest bands of all time and, without question, one of my all time favorite bands. It’s something that no one could ever predict.

What do you think of the Tedeschi-Trucks Band and the Allman Betts Band, who carry on the legacy?

I recently sat down with the Tedeschi-Trucks Band for their multi-night stand in the Beacon. We are a family and we play together at every opportunity. I love these guys and what they do. They do their own thing – They keep a lot of tradition alive, but they also do their own thing. And I’m proud that the Allman Betts Band does what they do. You came to our show in Philadelphia a few years ago. It’s great that people keep playing this music and music that is influenced by it. I think the music of the Allman Brothers is timeless.

I just realized we’d talked before – a couple of years ago for the book Primus, Over the Electric Grapevine: Insight into Primus and the world of Les Claypool. Allen Woody, the late Gov’t Mule bassist, introduced you to Primus’ music, right?

Allen Woody made me aware of Primus. He was a huge fan. I think it was just before we did Woodstock in ’94, he said he wanted to try Primus’ set. He was a huge fan of Les Claypool. And I wasn’t familiar then. So he played me a few things – “Jerry was a racing driver”, “My Name Is Mud”. And of course I was immediately enthusiastic. And the Primus set at Woodstock was fantastic.

If things go as we all hope we will probably go on tour again as usual from March / April. And we plan to tour to support Heavy load blues. We also recorded another Gov’t Mule album that will be out next year that we will be promoting as well. We’re just excited to get back to work. 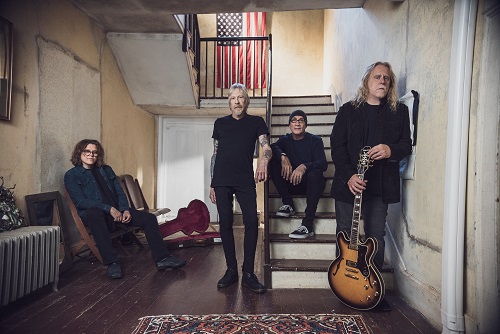 Donald Trump is nervous that his role in overturning Roe v. Wade could hurt his chances of retaking the...

Resize and prepare your photos for PRINT (Photoshop CC Tutorial)

11 best dishes to cook for a Mexican-inspired feast