They couldn’t have asked for a better Friday night as Hot Tuna – its core members Jorma Kaukonen and Jack Casady – performed an acoustic set of their unique take on the blues within the confines of the picturesque, historic Franklin Theatre. Something about it just felt so right, so appropriate to the setting and the program tonight.

The Franklin Theater is about the size of an old movie theater, with tables and chairs in the front, near the stage, with about 20 more rows running to the back. With tuna in town, the store was full. When 81-year-old Jorma Kaukonen, in his usual Pendleton and jeans, and younger 77-year-old, dressed in black, Jack Casady, appeared on stage, the usual hoots and howls echoed through the room before falling silent and the musicians started playing.

Kaukonen, who will be invited to a belated 80th birthday party at New York City’s famed Carnegie Hall along with Casady and many others in April, took on multiple roles — fingerpicking guitarist extraordinaire, husky-voiced lead singer, the general master of ceremonies, and comedic Slide to Casady. A few words of wisdom or a little dry humor, and he easily slips into any Tuna favorite – be it a standard blues number like Leroy Carr’s “How Long Blues” or Blind Blake’s “That’ll Never Happen No More” or a Original like “Broken Highway” or “Too Many Years”. 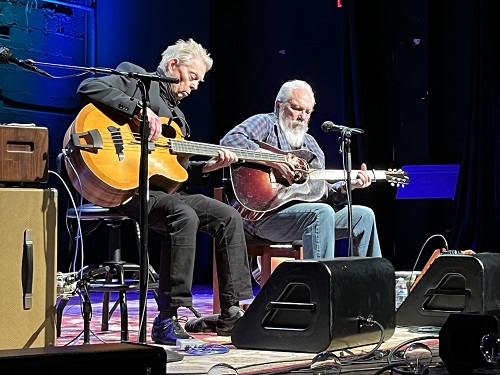 The guitarist opened up about what he’s been up to during the pandemic, spending most of his time at his Fur Peace Ranch in Ohio, checking out old hot tuna material and struggling to return to his roots. In fact, the backbone of any Tuna song is usually a patchwork of country blues, but the interplay between Kaukonen and Casady takes it to another dimension. We’re talking a heady musical elixir that’s been brewing since the Jefferson Airplane days, and maybe even earlier, when the two first met in Washington DC

Every time Kaukonen slipped into deep improvisational raga, Casady was inevitably there, riding the shotgun and fishing between the guitar weaves. The agility between the two musicians mesmerized the audience, who roared their approval at every turn. “He never lets me down,” Kaukonen smiled after his partner played a soothing bass line that hung in the air for a minute or two before descending into the airwaves. You really had to be there to appreciate the subtle purity of Casady’s custom acoustic bass. 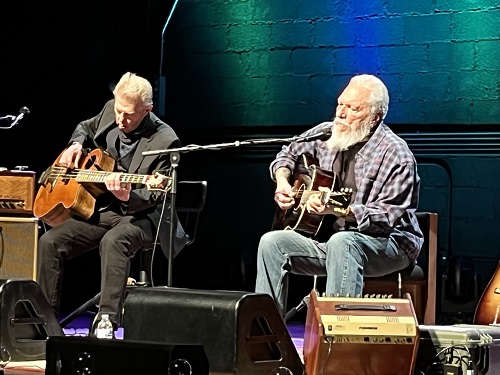 “Before we get too merry…” Kaukonen announced after a particularly lively “Ode For Billy Dean,” which stands out from the group’s 1972 studio release. Citizens. But now it was time to pay tribute to the great Reverend Gary Davis with a memorable cover of Death Don’t Have No Mercy. Although Bob Dylan and the Grateful Dead have included the song in their live repertoire, it seems most comfortable in the hands of Hot Tuna.

A reverent reading of Jimmie Cox’s Nobody Knows You When You’re Down and Out led to a story about the complexities of tuning. After getting past the obligatory reference to the airplane with “Trial By Fire” and “Good Shepherd,” the duo returned to the good Reverend Davis, sipping “I Am the Light of This World” with lively conviction, completing it Core set a soul-searching Keep Your Lamp Trimmed And Burning.

Rather than leave the stage, the two Rock ‘n’ Roll Hall of Famers stood up for a moment, then sat back down and gave an encore of “Water Song”, one of their most popular instrumentals. The cold of the night couldn’t hold back the fire burning at the Franklin Theater from the performance of Hot Tuna. A pair of salty pirates whose “embryonic journey” unfolded in the heart of the Woodstock nation come to your local suburb of Nashville – and you can’t imagine being anywhere else. 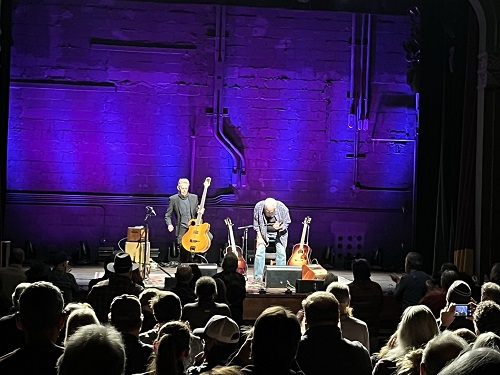 Guzman Elected to WorthPoint’s Board of Directors

Guzman Elected to WorthPoint's Board of Directors

John Oliver Points Out the Difference Between Alex Jones and Monkeypox

Although John Oliver’s main story on his latest episode of Last Week Tonight was about monkeypox, he couldn’t help...

22 Amazing Things to do in Olympic National Park