Tinsley Ellis broke onto the national blues scene with his early ’80s band, the Heartfixers. By late in the decade, when the Atlanta-based guitarist and singer began releasing albums under his own name, he also became a fixture in the genre’s international club and festival circuit. Over the years he’s earned a reputation for full-throttle live shows and well-crafted albums that hinge on his powerful singing and on his playing, which is based in tradition but packed with signature moves like deft finger slides, the use of open, ringing strings in single-note solos, and bends borrowed from B.B. King but laden with his own emotionalism and rock ‘n’ roll energy.

Ellis has been a seemingly tireless road warrior—at least until Covid. But even the pandemic couldn’t slow his songwriting, and he penned more than 200 new titles while in lockdown. You can hear 10 of those tunes, including 6-string bonfires like “Slow Train To Hell,” on his new album Devil May Care—the 20th in his catalog. Back on the road this year, Ellis stopped at Nashville’s 3rd & Lindsley on March 3, where he showed Premier Guitar his rig and told stories of close encounters with B.B. King and other greats after soundcheck and, that night, delivered a sermon on the power and glory of blues. His current run continues until the end of May, and Ellis has just been nominated in the 2022 Blues Music Awards for Blue-Rock Entertainer of the Year. 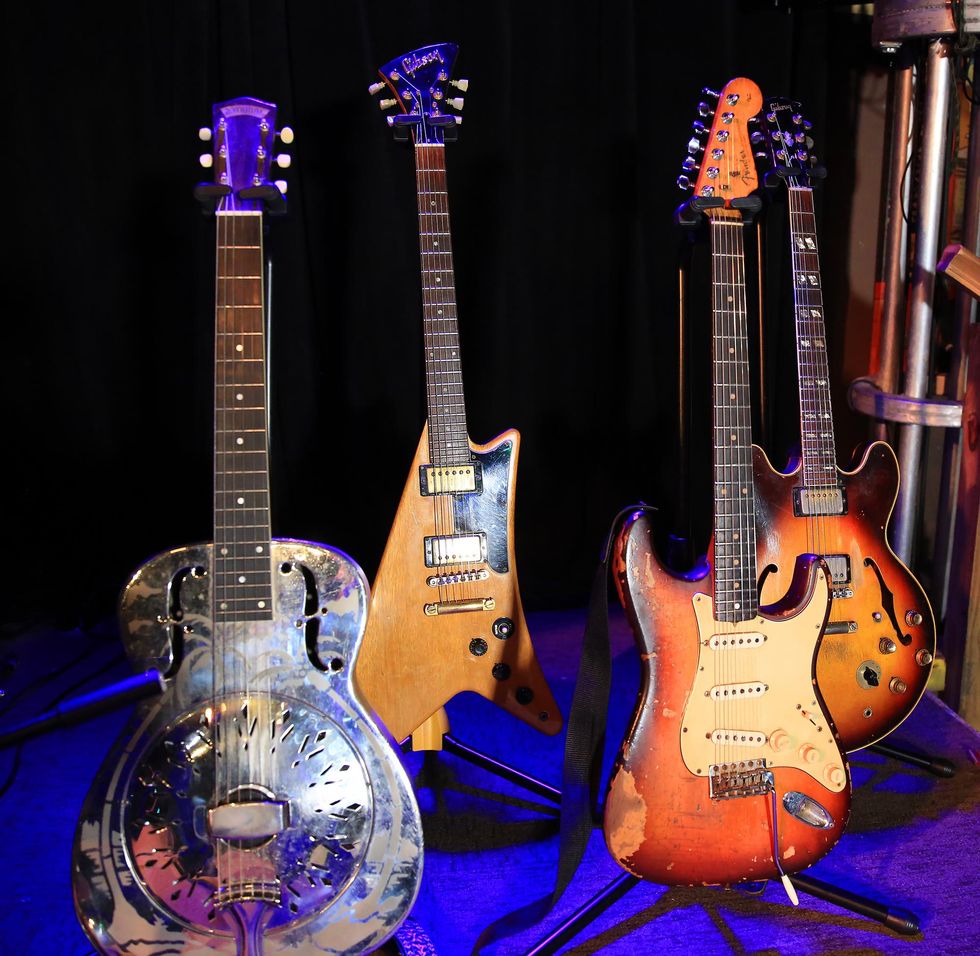 Tinsley Ellis favors classic tone flavors, and he gets them through classic guitars. At the 3rd & Lindsley gig, he relied on his 1959 Fender Stratocaster, his mid-’60s Gibson ES-345, a 1930s National resonator, and an ’80s Gibson Moderne. He also travels with a Les Paul and another Strat when the mood or need arises. 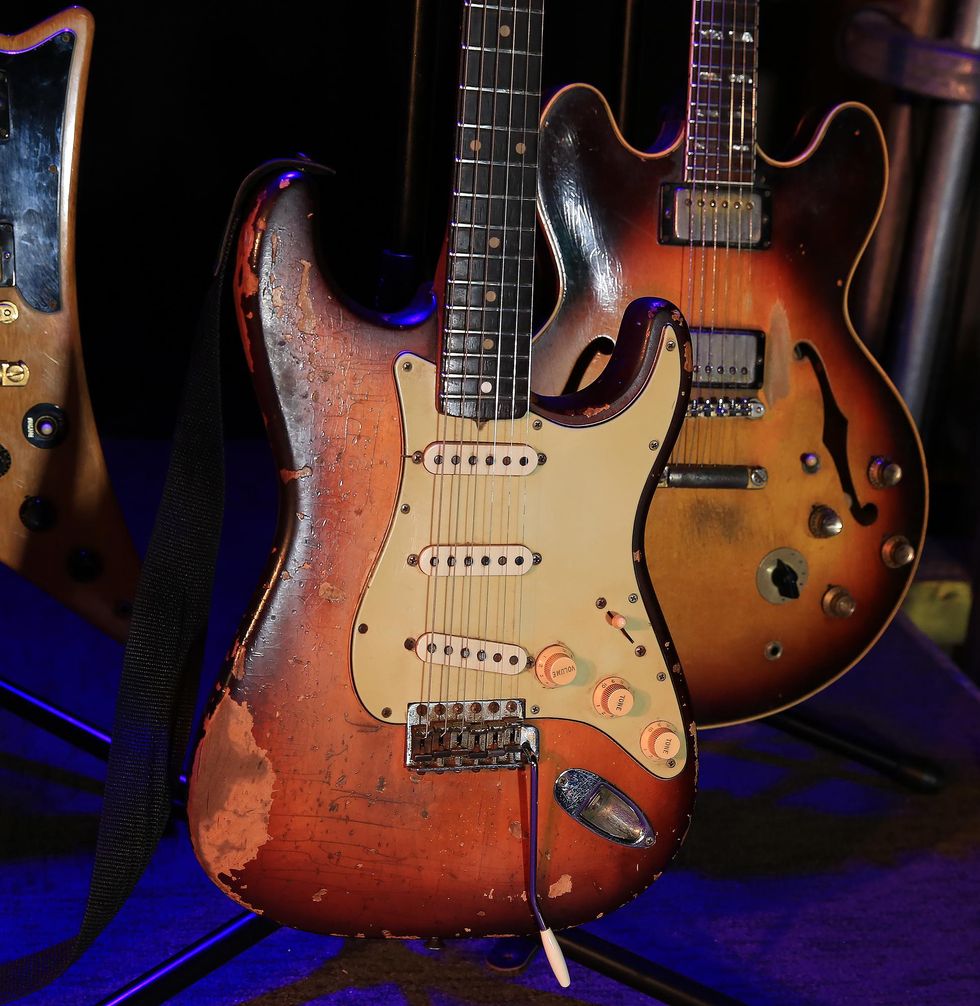 Here’s a close-up of that 1959 Strat. It’s been one of his companions for decades. When asked if he’s concerned about traveling with such a superb vintage instrument, he replies: “I own ’em to play ’em.” And indeed he does, eliciting a wide variety of classic single-coil tones from its barking pickups as he dances over its rosewood neck. One snag: the middle single-coil is a replacement, because the original was swiped years ago when he brought the guitar in for a repair. Ouch! 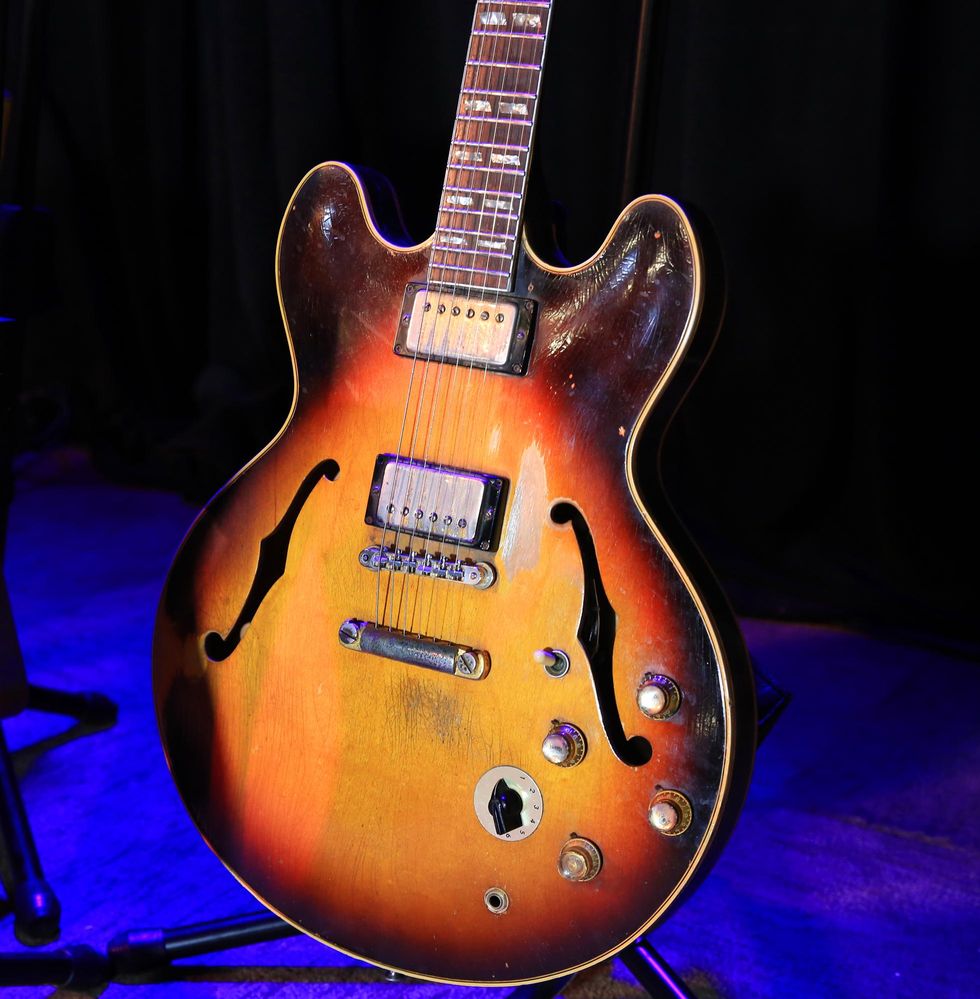 Dig that Varitone switch—which means this 1967 Gibson is an ES-345. It’s Ellis’ main axe and sounds killer through his double Fender amp setup and under his hands. “I bought this guitar in the ’70s, because I wanted to sound like B.B. King,“ he says. He loves the way the Varitone works as a filter, giving him that B.B. King Live at the Regal tone on demand, and even taking him into Peter Green turf. You can see every road mile on the ES’s beautifully weathered face. This guitar and the Strat are featured throughout the Devil May Care album, along with a Les Paul and several other carefully curated axes. 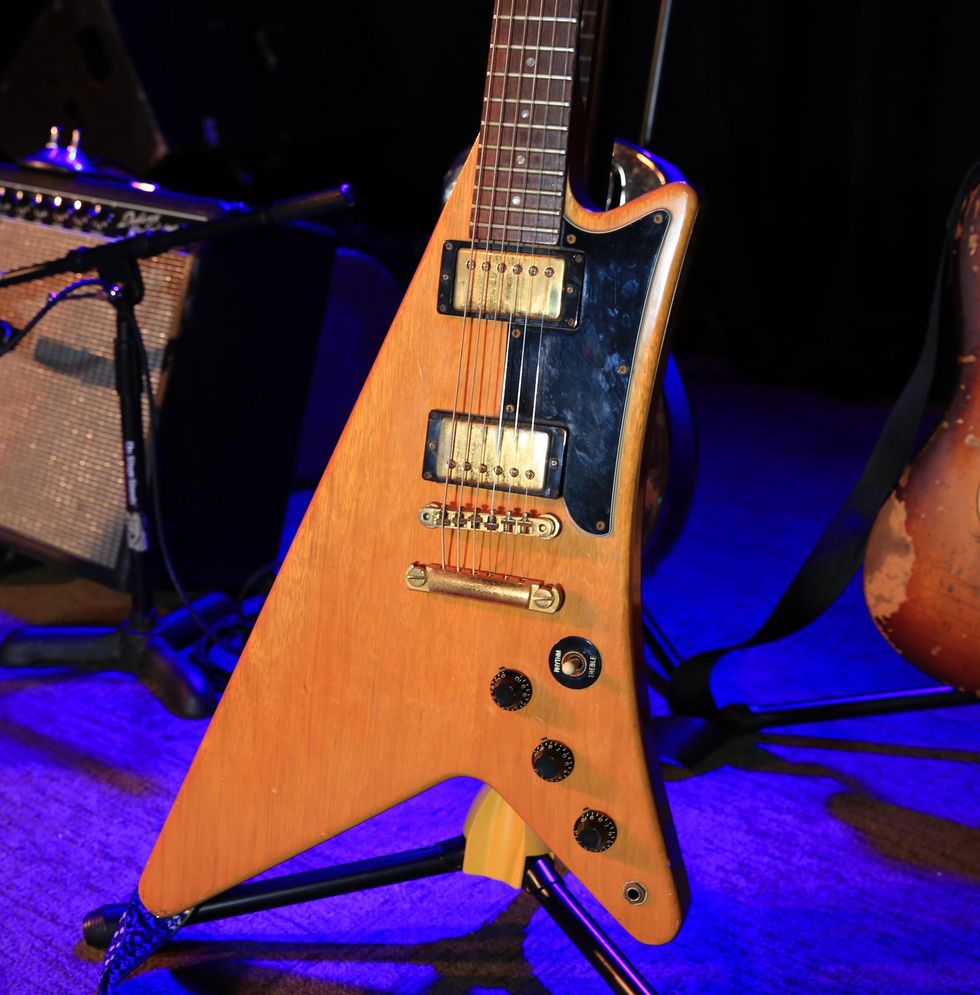 Although Gibson designed the Moderne in 1957, along with the Flying V and Explorer, it was not produced—save for a few prototypes—until 1982. Even then, few were made over just two years, although the guitar returned to Gibson’s catalog in 2012. Ellis keeps his stock Moderne tuned in open D, primarily, for playing slide, and the guitar seems to have an affinity for Elmore James’ material. 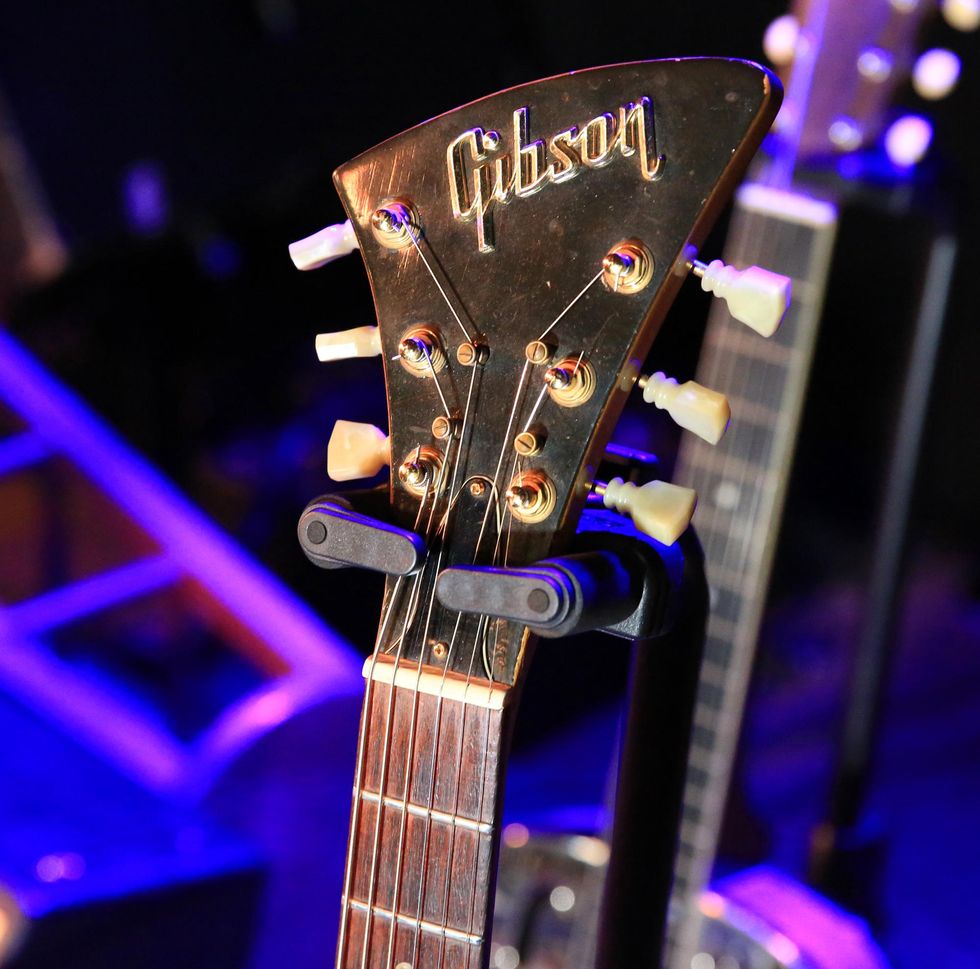 Take a Shine to This! 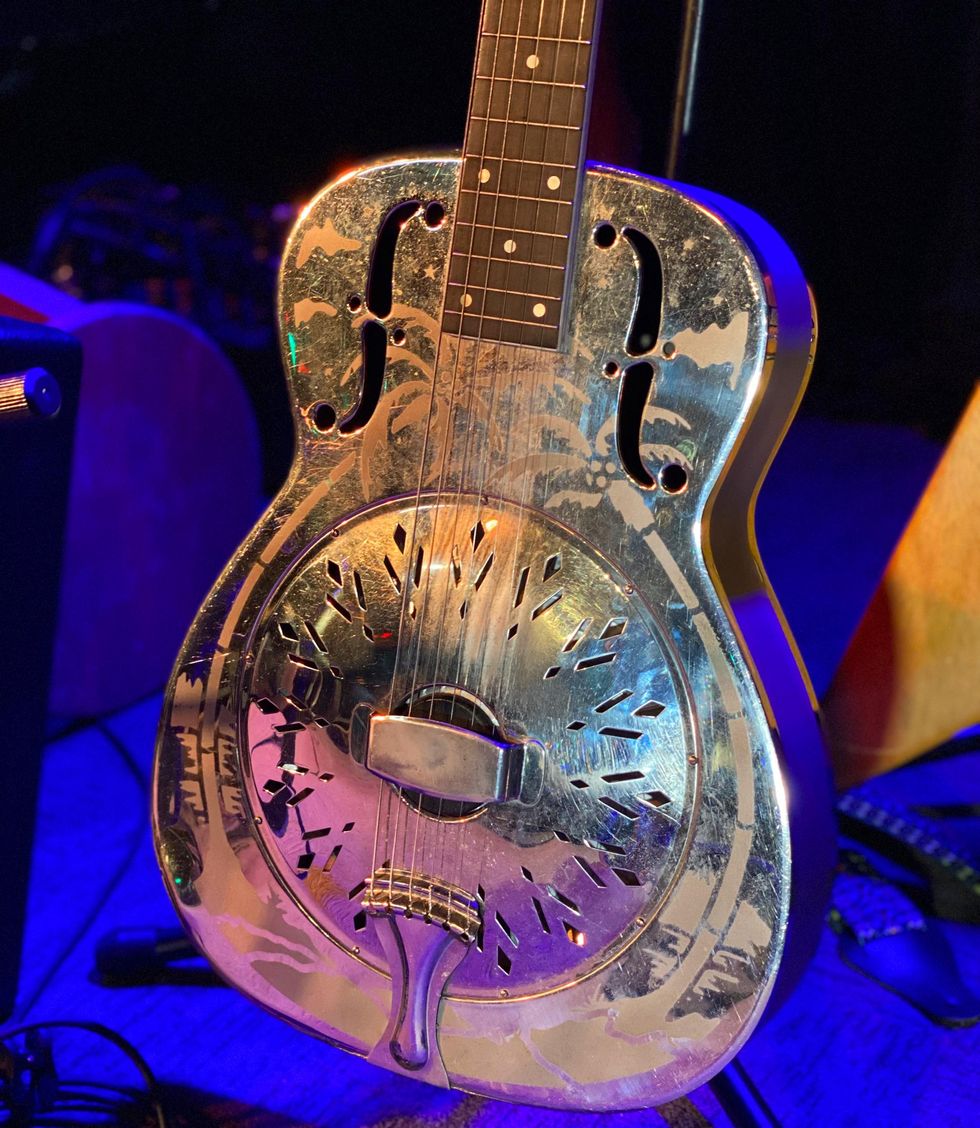 This is a 1932 National resonator, with its chrome body decorated by an oasis motif on the front and back. Ellis keeps this little doggie, a recent acquisition, mostly tuned in open G, and when he plays Muddy Waters’ “Can’t Be Satisfied,” laying his bronze slide on its strings, it’s impossible to not be carried back to the days this guitar—and the blues genre—were young. 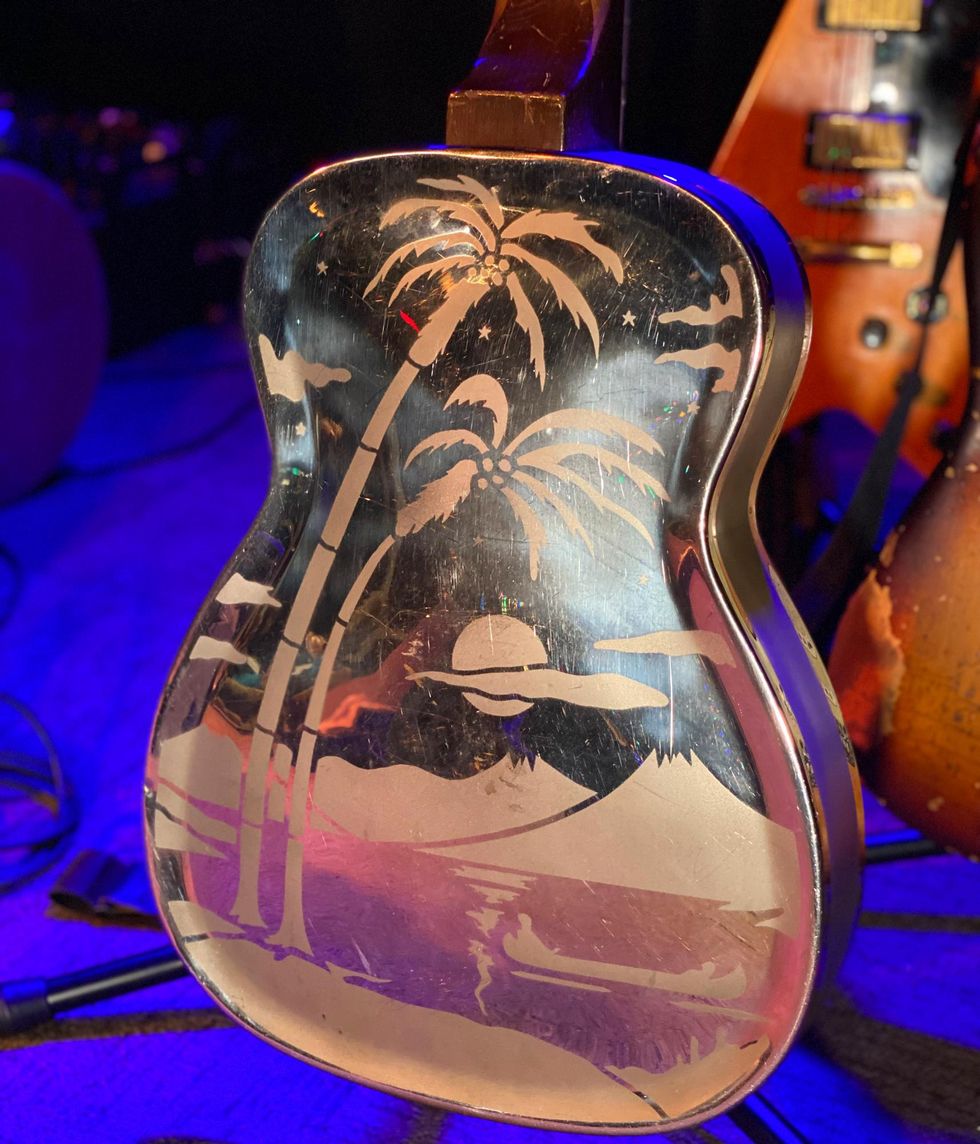 Here’s the backside of Ellis’ National.

A Super Super Reverb and Its Deluxe Sidekick 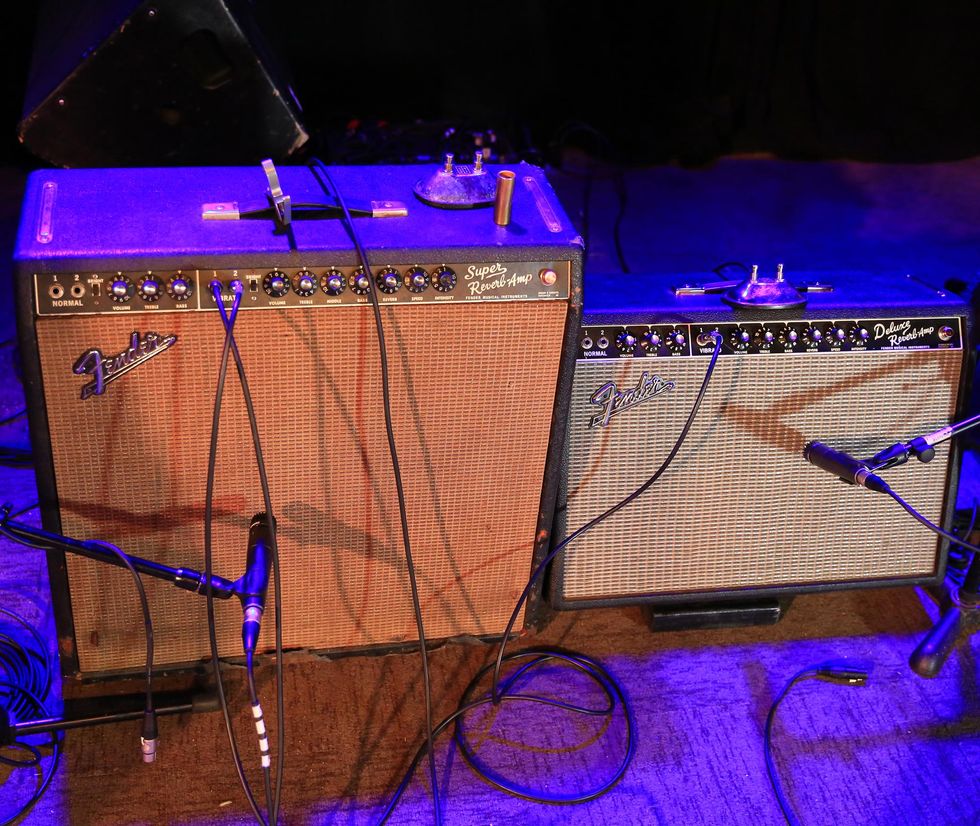 Ellis is a die-hard Fender amp fan and runs his vintage Super Reverb and reissue Deluxe in parallel to achiever his widescreen tone. This Super Reverb is a little more super than meets the eye. Ellis purchased the 40-watt wonder from Thom Doucette, who played harmonica with the Allman Brothers on the classic 1971 album At Fillmore East. Doucette owned two Supers, he and told Ellis he either played this one or its sibling—he no longer remembered exactly which he’d used—on the nights the album was recorded. Oh, and one more thing: This amp was also used by Stevie Ray Vaughan whenever he sat in with Ellis, who told us he hasn’t changed the settings—volume at 6, treble just past 8, mid at 6, bass at 3, and reverb just past 2—since the first time SRV plugged into it. “When I heard Stevie play though that amp, I thought, ‘Aha, that’s how it’s supposed to be set!’” 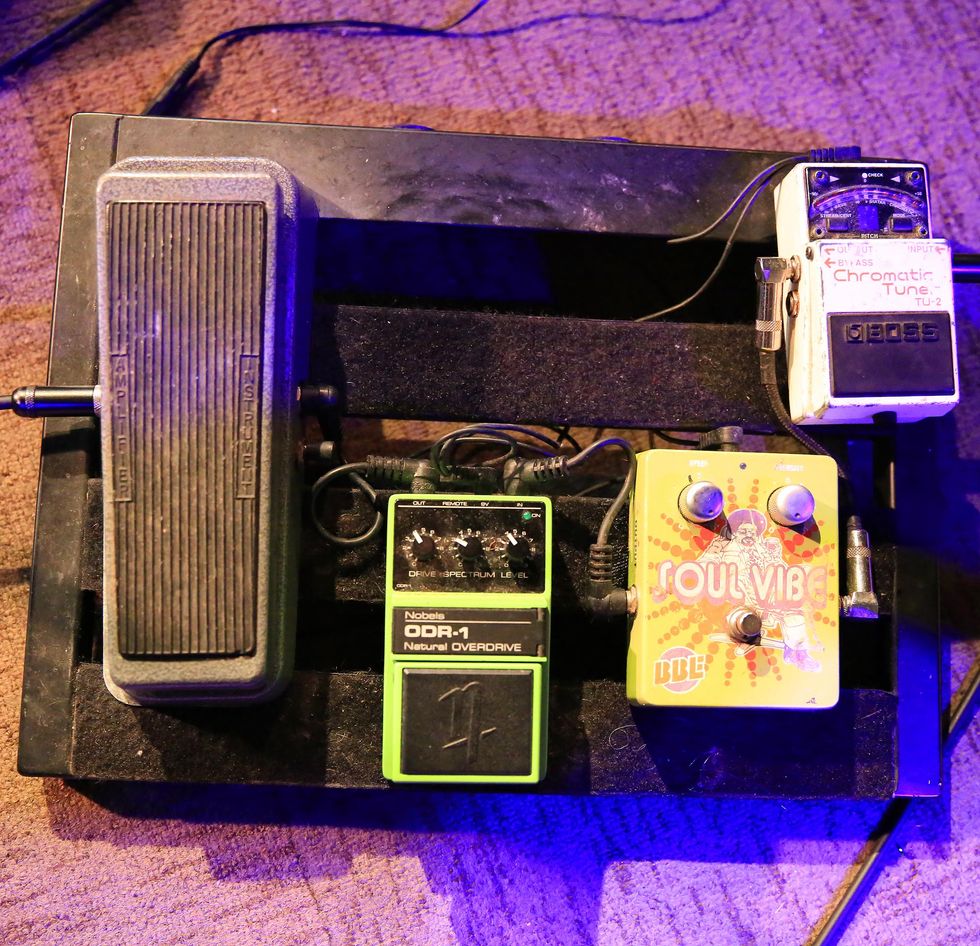 Blondie have excavated a work-in-progress demo of the song that became Autoamerican’s “Go Through It” for their upcoming Against...

Parents, Teacher Among Victims of 4th of July Shooting