Not even a year ago I would have said that Matt Ruhland is the best kept secret in the world of mandolin making, but the secret is out. His mandolins found their way into the hands of touring musicians like Eric Wiggs. Bob Minner and Don Julin. He recently sent a stunning instrument to Tennessee bluegrass powerhouse CJ Lewandowski (who just guest-starred on the FJ Podcast). CJ now has two Ruhlands; his other instrument was a powerful Engelmann-topped A-5, which Matt wanted to keep for himself until CJ got his hands on it. The six F-5 mandolins currently on Matt’s bench represent his 13thth Batch that will bring him to 74 mandolins in just five years of construction.

Matt is a soft-spoken guy who builds solo and has been too busy making mandolins to do much self-promotion. Despite a four-year waiting list, it’s hard not to come across a Ruhland mandolin on a festival stage or at a bluegrass jam these days. I recently saw a Ruhland on stage at Nashville’s legendary Station Inn in the capable hands of Harry Clark.

Matt’s mandolins are beautiful to look at, but what’s most striking about this young builder is how quickly he achieved a recognizable signature tone – dry, woody and big. They’re what he calls “bluegrass machines”…wide open and loud right out the gate. Or, as CJ Lewandowski said of his new Ruhland #61, “If I didn’t have a Loar, this Ruhland would be all the mandolin I would ever need.”

George Gruhn owned a Ruhland F-5 and recently took it backstage to the Grand Ol’ Opry where he gave it to a host of performers including Ricky Skaggs. In Gruhn’s words: “The Ruhland was well received … and I was positively impressed with the workmanship, playability, materials and sound of Matt’s mandolin. More mandolins are being produced today that are of high quality suitable for bluegrass music than probably at any time in the history of the instrument. In my opinion, Ruhland mandolins deserve the attention of serious musicians.” High praise from the godfather of fine stringed instruments.

I recently visited Ruhland’s shop to bring him a mandolin built by legendary Portland luthier John Sullivan. Matt said he wanted to examine how the top and back were carved, measure the thickness and look inside with a digital endoscope camera to examine how the clay sticks were shaped. In the few years I’ve known Matt, he’s taken similar opportunities to examine several mandolins made by the country’s finest luthiers. Last winter he had the famous Griffith Loar – the only known Lloyd Loar signed A-5 style mandolin – in his possession for a few days of intensive study.

During my visit, when I took the Sullivan F-5 out of its case and played just a few notes of a fiddle tune, you could see Matt’s antennae go up as he declared with absolute certainty, “That’s a thinly carved top, and they are there are some very tall and slender bars in there.” He could have saved some money for that fancy digital camera because when he finally got a look inside it wasn’t the camera but Matt’s ear and his knowledge of the physics of sound making that was told the story of how the Sullivan mandolin was built.

This past winter I had the opportunity to sit down with Matt and ask him a few questions about his approach to mandolin building, as well as his philosophy on life, cooking, fly fishing and his favorite single malt whiskeys.

Fretboard Journal: Now tell me about that load of mandolins on your bench.

Matthew Ruhland: I’m just finishing a batch of F-5s and doing the rough carving on a new batch of A-5s. Have alternated A-5 and F-5 batches for the past few years. The last A-5 batch contained some mandolins that are very dear to me – one for my good friend Bob Minner, who has been Tim McGraw’s guitarist for many years and can also play the skewer of a mandolin. A few mandolins in this batch have tops made from a stock of wood bequeathed by the late John Sullivan. In this current batch I’ve used Noble Fir for the bass tone bar and beefed up the bass side a bit more. [It’s] Sort of my secret sauce… brought back from the old days of Lutheranism.

FJ: How did you get into building mandolins?

MR: Well, it wasn’t Plan A… and certainly not what my parents planned for me. My siblings followed the classic formula – college, married, career, kids. I was something of a black sheep… playing rock music in Memphis and dreaming of opening my own BBQ restaurant. At some point my woodworking skills and my interest in music began to unite in my head. That and the desire to be my own boss and make a living in my own workshop. I haven’t had a “day job” in two years and I don’t look back. I am blessed to have found my calling.

FJ: The late luthier John Sullivan is a legend in the music community in the Pacific Northwest and beyond. Although you didn’t get to know him, his work and his spirit were important to you. Can you say a few words about that?

MR: I think my connection to Sullivan began when I heard the voice of Caleb Klauder’s legendary John Sullivan F-5 mandolin, which he calls “Sugar”. Since then I’ve seen and heard the many Sullivan instruments that are still here in the Pacific Northwest. Caleb has become a good pal and I was there at one of his gigs when he asked for a minute’s silence right after John’s death. That moment stayed with me. I’m actually building a mandolin for Caleb soon… it’ll be #100.

John’s keepsake and certainly his instruments are part of the music scene here in Portland. I’ve been fortunate to study his designs and work with John’s good friend and tonewood supplier, Bruce Harvie, who supplies most of my wood. I kinda feel like I’m carrying the torch – building with some of his old lumber supply – if he picked it up he must have heard something good in it so I’m glad I can build with it. 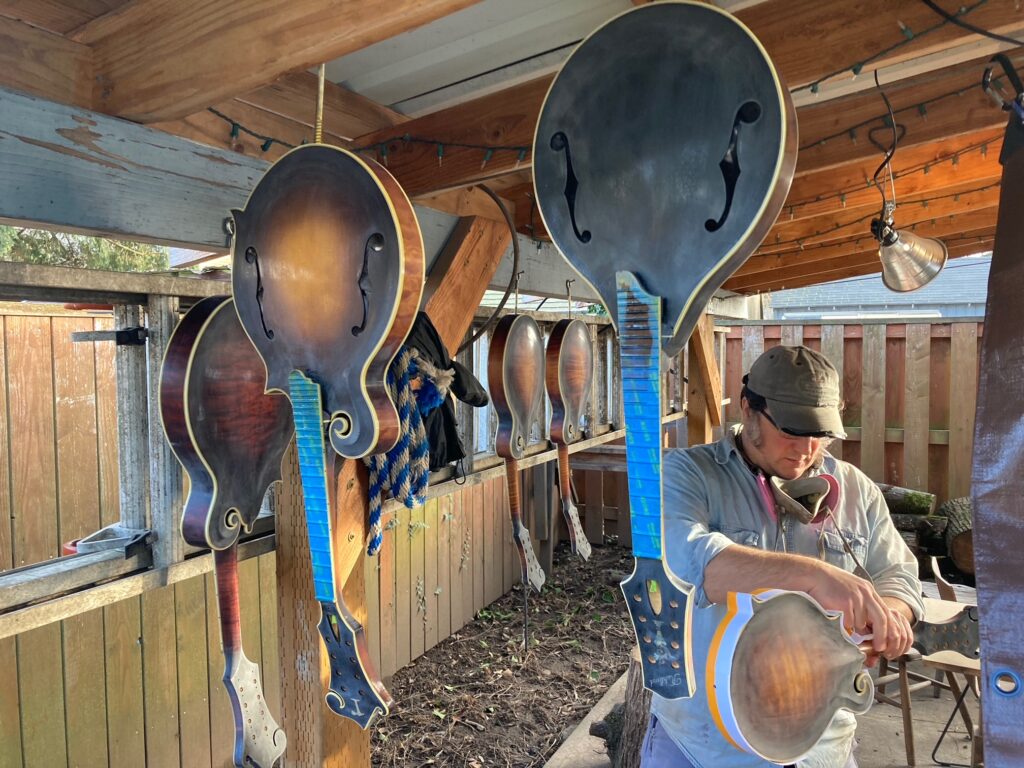 FJ: Which other mandolin makers have influenced you?

MR: Oh man, so many! This is simply an amazing time for mandolin building. Gil [Gilchrist]age [Dudenbostel], Michael Heiden, Will Kimble, Sim Daley…. Lawrence Smart was an early voice of support for me. He told me, “If you make it to #50, you’ll be building for the rest of your life.” I think he’s right.

FJ: One thing that stood out about your mandolins is the distinctive tone you develop. Talk about how you achieved that and how you make mandolins.

MR: I feel like I’m building with my ears and my hands. My goal is to produce loud instruments with complex sound in the upper register. I like it when they sing up to 15th Federation. I learned from master builders like Adrian Monrovic to rely on smooth arcs, smooth transitions and gradations. So was Sullivan’s way of carving mandolins. Not to be too technical, but I’ll start with a rough set of thickness measurements that I’ve landed on, and then adjust based on the individual flex of the blanket, what my ear is telling me, and what the person using the wants ordered a mandolin. I spend some time with each person I build an instrument for…to get to know their style…and whether they have the patience to mature the instrument or whether they want instant gratification. I believe the ones that need to be broken in and matured are the real gems in the long run.”

FJ: We’ve seen a steady stream of outstanding, well-seasoned, and visually stunning tonewoods on the mandolins coming out of your shop. Talk to us about the woods you use and your collaboration with Bruce Harvie of Orcas Island Tonewoods.

MR: I knew who Bruce was from several people and from his reputation among luthiers. I just called him out of the blue one day. A few days later I went to Orcas Island and bought 10 sets of wood for F-5s. He thought I was crazy diving headfirst with F-5s who haven’t built a single instrument yet! He’s become a good friend and mentor on this mandolin building odyssey… he gave me some good advice and some amazing tonewoods. 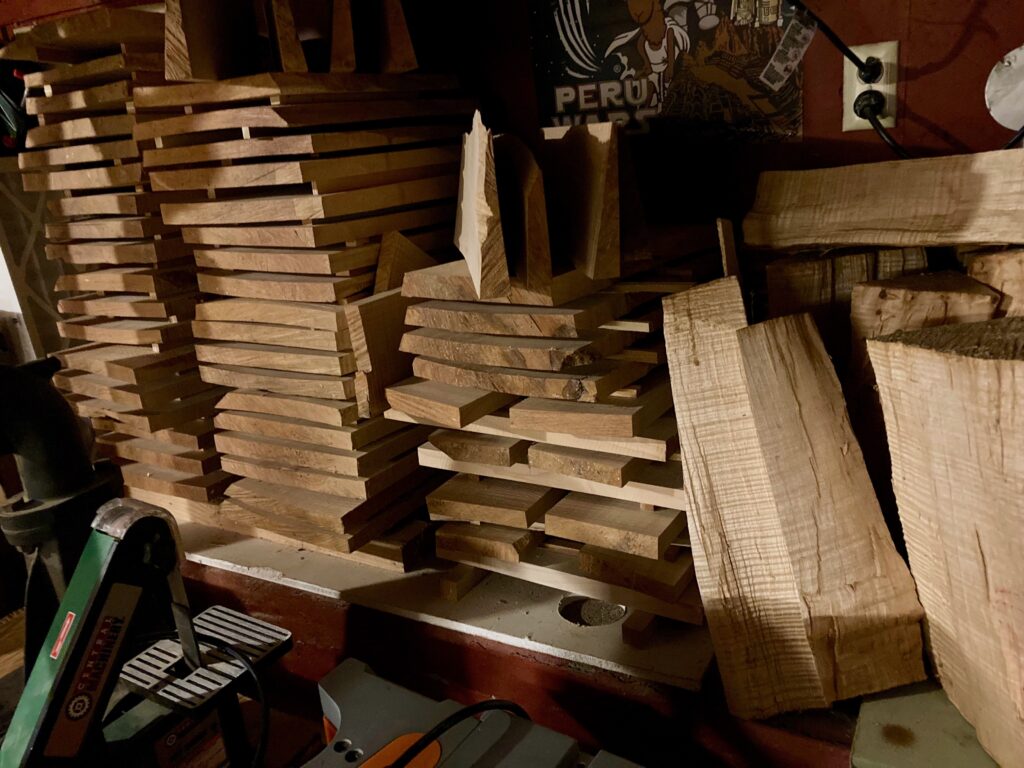 FJ: What do you do when you’re not building mandolins?

MR: Fly fishing is a great escape for me. It’s nice to live 95 miles from the Deschutes River. I call it my “happy spot” and try to sneak there every time a new batch of mandolins is hung out to dry. Music too: I try to come to festivals and jam and play the banjo with a local band once in a while. When I sit back, I rarely turn down a sip of Caol Ila – my favorite single malt Scotch. I’m also a great cook. I host bluegrass dinners at my house: bring an instrument and a side dish and let’s go!

FJ: What does the future hold for you? And besides mandolins, are there any other instruments that we can expect to come out of your business in the next few years?

MR: I’ve been thinking about building some five-string violins and archtop guitars. This may sound like blasphemy, but I think archtops make good bluegrass guitars. I’m planning on eventually building a new store – a large living/work space that I designed in my head last year – but right now I’m busting my ass catching up on four years of mandolin orders! 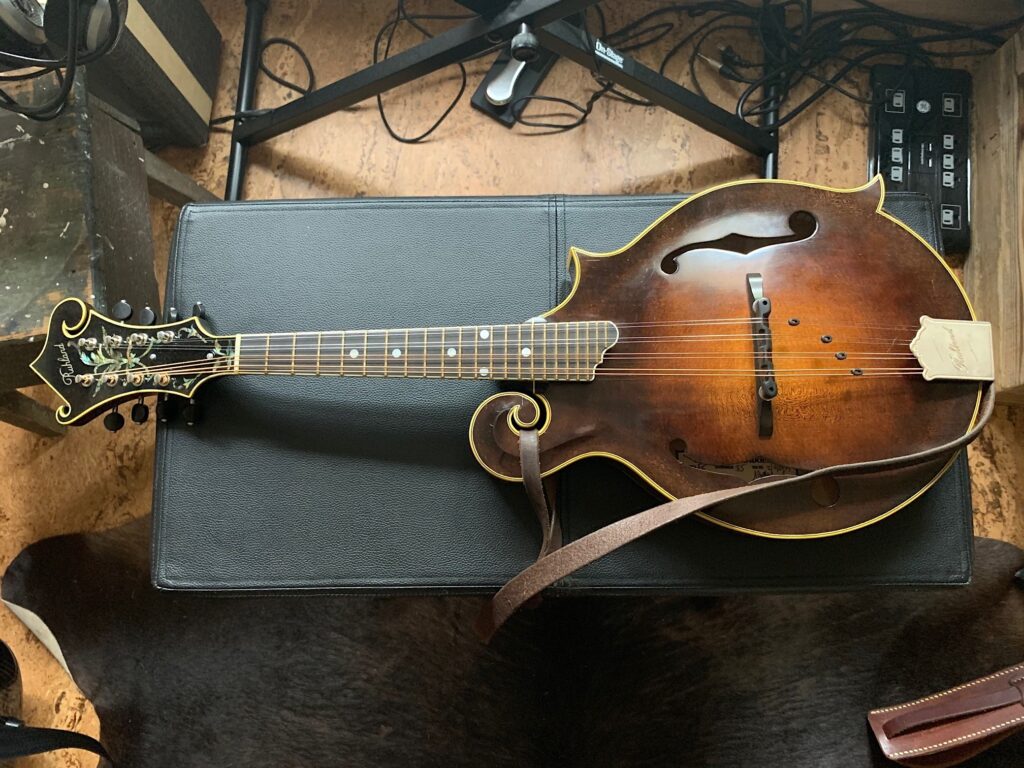 Best Things to do in Playa Del Carmen, Mexico

Best Things to do in Playa Del Carmen, Mexico

Sylvan Esso Straddle Line Between Pleasure and Pain on ‘Sunburn’