On this week’s Last Week Tonight, John Oliver began by acknowledging Mahsa Amini’s death in Iran and the protests that have followed, serpentine Florida Governor Ron DeSantis’s political stunt in which he (probably illegally) shipped 50 migrants to Martha’s Vineyard — “We could spend the rest of this show talking about DeSantis and why he always looks like he’s wearing a suit under his suit,” Oliver said — and Puerto Rico’s ongoing misery brought about by natural disasters and currupt and/or incompetent officials. Then Oliver moved onto his main story about Brazil’s upcoming presidential election.

Brazilian President Jair Bolsonaro, who for the past four years has pursued far-right policies while quite literally encouraging the relentless destruction of Amazon rainforests, is currently running well behind his challenger, former President Luiz Inácio Lula da Silva. Lula, as he is affectionately known, was given a 12-year prison sentence in 2018 for his alleged role in a massive corruption scandal. The case against him was annulled by Brazil’s Supreme Court due to procedural errors, and a suddenly free Lula aimed to get his old job back. Based on polls, it looks like he’s going to succeed.

Except, many Brazilians fear that Bolsonaro, who has often been described as Brazil’s Donald Trump, may not accept election results and will instead refuse to give up power. He’s already alleged that judges and election officials are trying to sabotage him and called into question the reliability of electronic voting machines despite the fact that they have been nothing but reliable for the past 25 years. 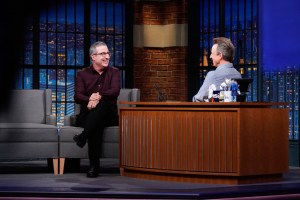 “There are only three alternatives for me,” Bolsonaro recently told cheering supporters. “To be arrested, to be killed, or to be victorious. And I tell those scumbags, ‘I will never go to jail.’”

Speaking of Trump, Bolsonaro and his administration are facing multiple investigations for wrongdoing. And, uh, also speaking of Trump, Bolsonaro made the effects of the pandemic in Brazil far worse than they had to be. He publicly mocked those concerned about Covid, sowed distrust about vaccines, and for months actively avoided the please of vaccine makers trying to get doses to Brazilians.

Once vaccines were finally available, almost 100 percent of the residents of Rio de Janeiro and the capital, Brasilia, got vaccinated, which is a pretty good indication that Bolsonaro was putting in place policies opposed by a large majority of the country. Imagine that!

“Luckily for us,” Oliver said, “Trump’s allies were generally limited to a shirtless man in a fur hat, a perpetually hoarse pillow baron, and some of his dumber children. But Bolsonaro has significant military support…. Generally, when someone threatens democracy, it’s a lot easier to say, ‘You and what army?’ when you’re absolutely certain that person doesn’t have an actual army behind them.”