Coolio, who died on Wednesday, Sept. 28 at the age of 59, was part of the generation that shepherded hip-hop into the American mainstream, topping the charts and soundtracking hot films like Dangerous Minds and Clueless. He seemed hard yet approachable; gritty but lively. Somewhere along his ascent, he and country legend Kenny Rogers became buddies and made a song called “The Hustler.”

“As a friend of Coolio, I’ll do whatever he wants me to do,” Rogers said in an interview with MTV about their collaboration, a hip-hop update to “The Gambler,” the track that the singer had made a hit in the late 1970s.

In a post-“Old Town Road” world, the rap-country coupling may not feel groundbreaking, but if Lil Nas X’s Western yarn caused all that ruckus in the year 2019, think about how crazy Coolio and Kenny’s link-up must have seemed in 1998. “I enjoy working with people that you wouldn’t expect me to be with,” said Rogers. “It’s a great opportunity for me to get kinda involved in another form of music.”

Country and rap can be kindred spirits in their storytelling, and Coolio aptly translated the lessons of “The Gambler” to fit the times. Written by Don Schlitz, “The Gambler,” centers a sage betting man that a narrator meets on a train “bound for nowhere” that offers advice in the form of an extended allegory on what he knows best. “You’ve got to know when to hold ’em/ Know when to fold ’em/ Know when to walk away/ And know when to run,” he famously warns. 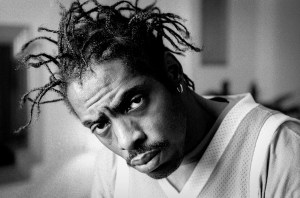 Coolio’s “The Hustler” is much less allegorical and succinct, though his music video is more elaborate than Rogers’, bringing the scene to life by playing the central character in prosthetics as well as himself as the narrator. Rogers stars as well, singing that iconic hook in between Coolio’s verses on street — and general — smarts. “Bang bang if that’s your thang/If that’s your aim/But most of them fall when they get hit,” the Hustler warns.

“The agreement we had is that the message had to be a positive message,” said Rogers at the time. “Because I don’t wanna hurt myself and the people who follow me, and I don’t wanna hurt him, with the people who follow him.” Holding to it, Coolio’s Hustler is as encouraging as he is enterprising: “We need a few good men to take a few good stands/And lend a few good stands/And make a big stack of ends.”