“If it bleeds, it leads” goes the old saying about the way TV newsrooms choose their stories. Grisly murders, gruesome accidents, and graphic violence often lead news broadcasts because producers know just as well as politicians that scaring people is a great way to make sure they keep paying attention to you.

The ugliness, laziness, and cynicism of a lot of crime reporting was the focus of John Oliver’s main Last Week Tonight story. As he explained, studies have shown that watching local news leads to increased fear and concern about crime, and that people who watch TV news are more likely to support tougher crime policies. In other words, watching TV news can disconnect people from reality. Every year for more than three decades, Gallup has polled Americans about whether they think crime has gone up or down from the year before. In all but one of those years people said crime was up — even though the past three decades have seen an unprecedented drop in crime nationally. The only year people said they thought crime was down? 2001.

“Famously a year where everything was super chill, no drama, just vibes,” Oliver said.

It being October, Oliver illustrated his point about the irresponsible cravenness of some crime reporting with the latest example of Halloween candy fear-mongering: the idea that mixed in with Smarties and SweeTarts this year will be “rainbow fentanyl.” Oliver showed clips of several different local newscasters gravely informing viewers about the colorful pills that may be given out to trick-or-treating children… for some unfathomable reason they never bothered to explain. Though to be fair, one of the local journalists did mention the very relevant fact that this has never actually happened — though he didn’t do so until the very end of his piece. 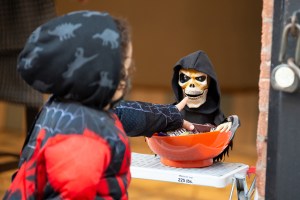 “I’m so glad you tacked that disclaimer on at the end there,” Oliver said. “I’m sure that 3-second debunk… is exactly what everyone is going to take away from that report, and definitely not the images of little Hulks sticking their hands into bowls of Skittles-shaped smack.”

Journalists far too often take the police at their word, as though including the phrase “Police say” in their stories allows them to parrot everything police say without making sure it’s true. One police public information officer even proudly described watching reporters read his press releases word-for-word on air. That’s not journalism — it’s propaganda.

Also? Cops lie. All the time. Ever seen one of the many reports of police getting sick after their food has been tampered with at restaurants? Many either never happened or were schemes cooked up by police to gain sympathy. There have also been many stories of police nearly dying because they touched and/or were merely in the same room as fentanyl, all of which is quite literally impossible. And that’s to say nothing of all the lying police do in an official capacity. Yet many local and even national news outlets gladly regurgitate whatever the police tell them as though it’s de facto true. Again, that makes them propagandists, not journalists.

“By presenting police uncritically, [journalists] are not just helping them dodge accountability,” Oliver said. “They’re giving them a huge lobbying platform. Right now you don’t have to look far to find cops on TV suggesting that the fix to any rise in crime is to undo the criminal justice reforms of the past few years — and to give them more money.”

That ridiculous rainbow fentanyl story picked up by all sorts of local news outlets? It originated in a DEA press release the agency sent out at the same time Congress was determining budgets. Well, it worked. After all those news reports scared voters, Congress gifted law enforcement with an additional $300 million so that they could fight the fake scourge of opioid candy.