John Oliver was off last week, which meant he didn’t have a chance to do a show at the very height of then–UK Prime Minister Liz Truss’s unprecedented political implosion. (After becoming PM on Sept. 6, she was forced to resign on Oct. 25 due to a Benny Hillian litany of screw-ups.) Oliver is always entertaining when indulging his love/hate relationship with his home country, so it was nice to see Last Week Tonight open Sunday with a brief segment about Truss’s — and just generally the UK’s — many woes.

“[New Prime Minister Rishi] Sunak is incredibly lucky that he’s following Liz Truss, because the bar is so low right now,” Oliver said. “All he really has to do is not personally throw the economy into a tailspin, and deliver a speech without leaving a weird pause for clapter after saying ‘pork markets.’”

Oliver’s main story was about crime, the obsession many Republican politicians are currently pretending to have with it in order to scare people into voting for them, and bail reform. In very simple terms, cash bail is money some people accused of a crime are allowed to give to the court as a sort of insurance policy that they’ll return for their trial — and it’s a fucked system.

For starters, it allows people with means to await trial at home while those who can’t afford bail remain in jail. That, or they can go to a bail bondsman, who guarantees the accused will show up in court and pays the bail — in exchange for a hefty fee from the accused. Bonding, Oliver explained, is a $2 billion a year industry. 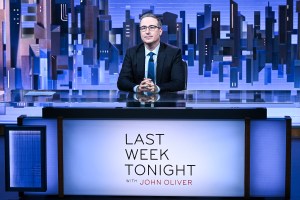 Every day there are about half a million people imprisoned in local U.S. jails who have not been convicted of any crime — that’s more than half of the total population of local jails. This is great news for prosecutors laser-focused on their conviction rates, because the prospect of being stuck in jail for months is enough to get some people to confess to crimes they didn’t commit just so they can go home.

“We shouldn’t hold people captive in shitty conditions simply because they can’t buy their way out,” Oliver said. “That is what Spirit Airlines is for.”

Over the past few years many states and jurisdictions around the country have passed laws (with bipartisan support) that reformed their cash bail systems. After New Jersey did so — the state is often held up as the model for reform — the number of people in the state’s jails went down by an unbelievable 50 percent. Municipalities that have passed bail reform experience no upticks in crime because of it.

However, now that crime in general has ticked up all over the country, Republican politicians and police alike have seized on bail reform as the reason why. Politicians in New York State were blaming bail reform for crime literally eight days after it went into effect. Former NYPD Commissioner Dermot Shea would loudly blame bail reform for the city’s rise in shootings for any journalist within earshot, but when testifying under oath, he admitted it’s not a factor at all.

Nevertheless, New York State’s bail reforms have recently been rolled back… twice. The constant stream of televised lies work; Oliver pointed out that after House Speaker Nancy Pelosi’s husband was attacked by a QAnon-addled intruder in their home, Fox News did an interview with Texas Rep. Michael McCaul in which he linked the attacker to bail reform — despite the fact the attacker was, in fact, not out on bail.

Oliver, who even amid the jokes was clearly enraged by what he was reporting, brought up an investigation of about 500 U.S. jails that found between 2008 and 2019 more than 7,500 inmates died. Even more troubling? Almost 5,000 of those people were never convicted of anything. They were just awaiting trial.

“Cash bail is arbitrary, destructive, and basically criminalizes poverty — and that is without getting into the massive racial disparities involved here,” Oliver said. “Even after convictions, we’re clearly locking far too many people up in this country. But to do it before they’ve even been convicted of anything is proof that civil liberties only apply tangibly to the privileged and for anyone else, they are entirely theoretical. Anyone even trying to defend a system like this is basically morally bankrupt.”

The Great Scandinavian Guitar Show 2022 at Fryshuset in Stockholm, Sweden

The Great Scandinavian Guitar Show 2022 at Fryshuset in Stockholm, Sweden