The man accused of breaking into House Speaker Nancy Pelosi’s San Francisco home early Friday morning and assaulting her husband, Paul Pelosi, with a hammer pleaded not guilty on Tuesday to attempted murder and all other state charges, according to Reuters.

DePape made his first court appearance at the San Francisco Superior Court on Tuesday. He appeared at the arraignment with his right arm in a sling, according to Reuters, which his public defender explained was a result of a dislocated shoulder that occurred during his arrest.

DePape’s lawyer, Adam Lipson, spoke with reporters after Tuesday’s hearing. “What I will say is that there’s also been a lot of speculation regarding Mr. DePape’s vulnerability to misinformation,” he said, according to The Hill. “[That’s] certainly something that we’re gonna look into, that we’re gonna delve into, as his defense team, but again it would be premature to talk about that at this time.” At the time, Lipson acknowledged he had not yet seen the police reports. 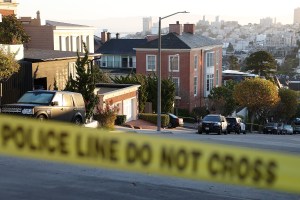 At the time of DePape’s arrest on Friday, he maintained a subscription-model blog where he expressed rage over Covid-19 precautions and espoused beliefs shared by the conspiracist QAnon movement. On his Facebook page, DePape echoed similar hard-right and conspiratorial content, which the social platform deleted on Friday.

San Francisco Police say that the suspect entered the Pelosis’ home at approximately 2:30 a.m. on Friday. Multiple reports confirmed that he confronted Paul Pelosi, asking, “Where is Nancy? Where is Nancy?” The speaker was not at home at the time of the invasion. Police also stated that they witnessed the two men fighting over a hammer, which DePape then used to attack Pelosi before officers tackled the suspect.

Trump supporters who broke into the Capitol on Jan. 6 made similar demands for Pelosi, with some rioters chanting “Nancy, Nancy” as they roamed through the building.

A criminal complaint states that DePape broke through a glass door of the residence with the hammer that he later used to attack Paul. The alleged assailant brought zip ties, tape, rope and gloves, as well. In an interview DePape gave to the San Francisco Police Department after his arrest on Friday, he said he was going to “talk to her.” If she told the “truth,” DePape said he would release the speaker, but if she “lied,” he would break “her kneecaps.” In the document, DePape described Speaker Pelosi as “‘leader of the pack’ of lies told by the Democratic Party.”

DePape faces between 13 years to life in prison for state charges, according to San Francisco District Attorney Brooke Jenkins. Federal prosecutors charged DePape separately with federal assault and attempted kidnapping charges punishable by up to 50 years in prison, The Hill reports. The suspect was was ordered to remain jailed without bond.

On Monday, Speaker Pelosi issued a statement on the attack on her husband, and wrote, “Since the horrific attack on Paul early Friday, we have been deluged with thousands of messages conveying concern, prayers and warm wishes.  We are most grateful.  She also added that, “Paul is making steady progress on what will be a long recovery process.”

Ryan Reynolds, Will Ferrell Get Help From Milli Vanilli in ‘Spirited’ Spot – Billboard

Ryan Reynolds, Will Ferrell Get Help From Milli Vanilli in ‘Spirited’ Spot – Billboard