I’ve never walked through the Yamaha guitar HQ in Hamamatsu, Japan, but I suppose it’s huge. After all, Yamaha makes thousands of acoustic and electric guitars every year for every imaginable price (not to mention all of the Miscellaneous Yamaha products). I envision a huge building with hundreds of sophisticated workers, some serious tech, and tonewoods stacked to the ceiling.

But today I’m visiting Yamaha Miscellaneous Room for guitar making. It is not a factory but a small workshop. It’s clean but well used. In fact, it doesn’t look too different from the workshops of the independent luthiers I usually interview for the magazine. And it’s in Southern California.

Here, Andrew Enns, Yamaha’s Senior Acoustic Guitar Builder, was tasked with building the brand’s future high-end acoustics. Here he builds prototype guitars the old-fashioned way: get a chisel ready, bend sides, thin out top, cut an instrument piece by piece and glue it together. Again, the scene is no different than other high-end luthiers, but Enns’ background, his approach, and the trans-pacific construction techniques he uses may surprise you. I’ve never seen a guitar built like that.

Get to know Andrew

Enns has neither completed one of the big guitar making schools nor a master apprenticeship. He’s actually quite self-taught. “My family did a lot of things,” he recalls growing up in Fresno, California. “My grandparents on both sides were trained carpenters and I think it kind of runs in the family. When I was a little kid I would go to my father’s father’s house and he would show me how to cut things with a coping saw. [I remember] making stuff in my parents garage.”

Around high school, the guitar virus hit him hard. Enns dove into the workshop class. “I took too much with the lumber shop and they wouldn’t let me take more,” he recalls. “So I became an assistant to the company teacher. I was in workshop classes the whole time. There was this old electric guitar body, like a Les Paul, that was hanging around there. Somehow it dawned on me that guitars are made of wood and I know how to make things out of wood.” 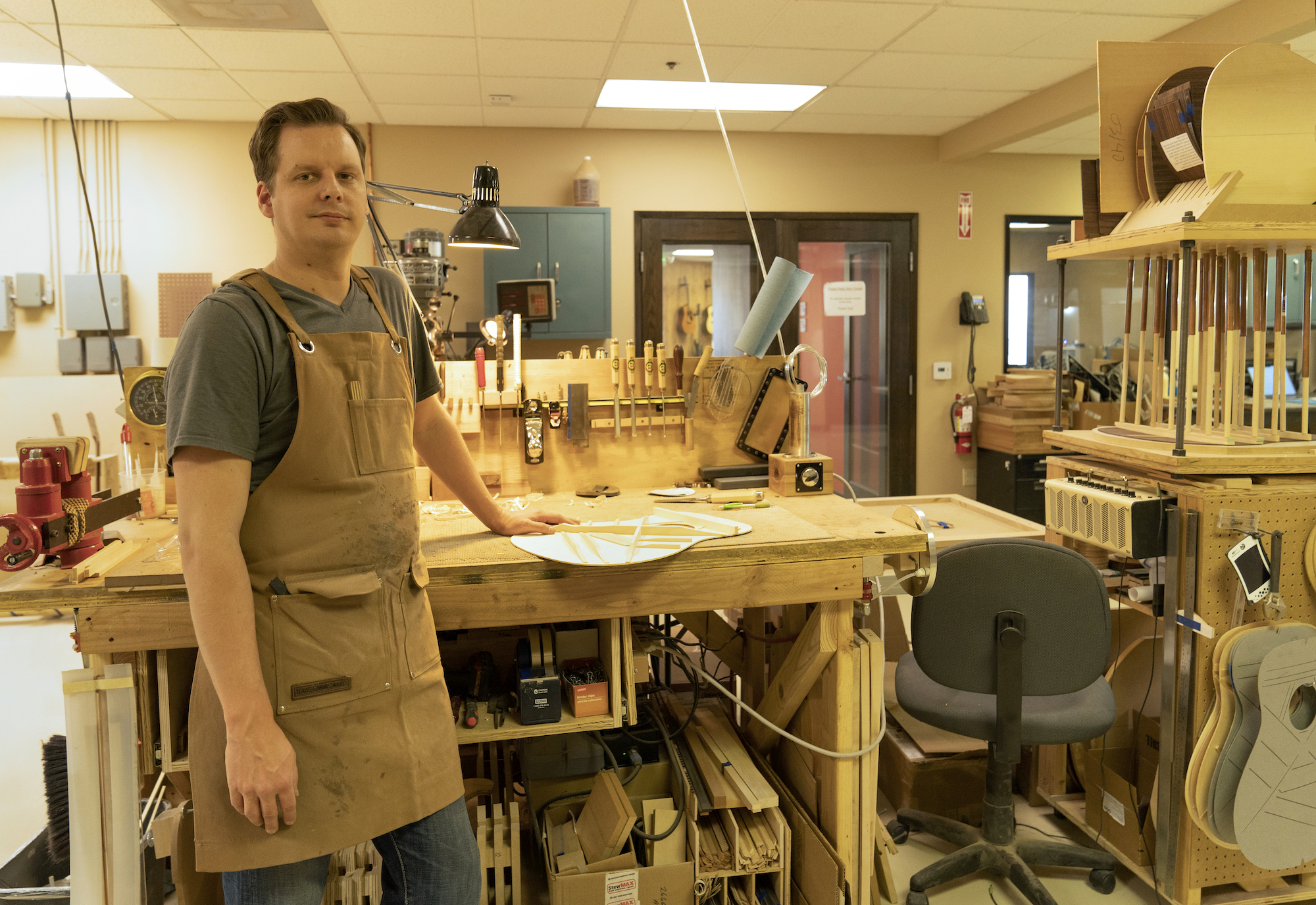 The first instrument he tried was his rendition of his “dream guitar” at the time, a PRS-inspired flame maple creation. That was around 2000, long before there were countless YouTube tutorials or shop tours explaining how to build a guitar. For inspiration, he drew on the printed catalogs from parts supplier StewMac. “I didn’t know a single person who had ever built a guitar,” he recalls. “Over the course of about a year, as I slowly got some money, I bought parts.”

Enns went to college to be an engineer, but all the while he couldn’t resist building new instruments. “I lived in an apartment in Orange County, California, and I was literally building electric guitars on a 5′ x 8′ deck outside,” he says. “I spoke to my neighbor and said, ‘Hey, I’ll make some noise! It’s just a handheld router…I’m building a guitar!” He soon dropped out of college and got a job at a guitar company doing customer service and minor repairs. When that gig ended, he went back to school to get a degree in film production.

“I was working in Hollywood at a job I really didn’t like, making very little money and commuting widely,” he recalls. “I thought, ‘I need to get a better job than this.'”

He found himself back in the guitar industry – working for Cordoba – and hasn’t looked back since. At this company he received a virtual master class in classical guitar making. He’s had unlimited hands-on time with some of the best nylon-stringed instruments in the world, and he’s racked his brains with acclaimed luthier/Cordoba consultant Kenny Hill. “Kenny came and stayed a week and would say, ‘Okay, this week we’re going to go through Torres. We’re going to design and essentially build a Torres and then run through the specs.’” Eventually, the pair worked their way through the greats: Torres, Hauser, Rodriguez and Reyes. 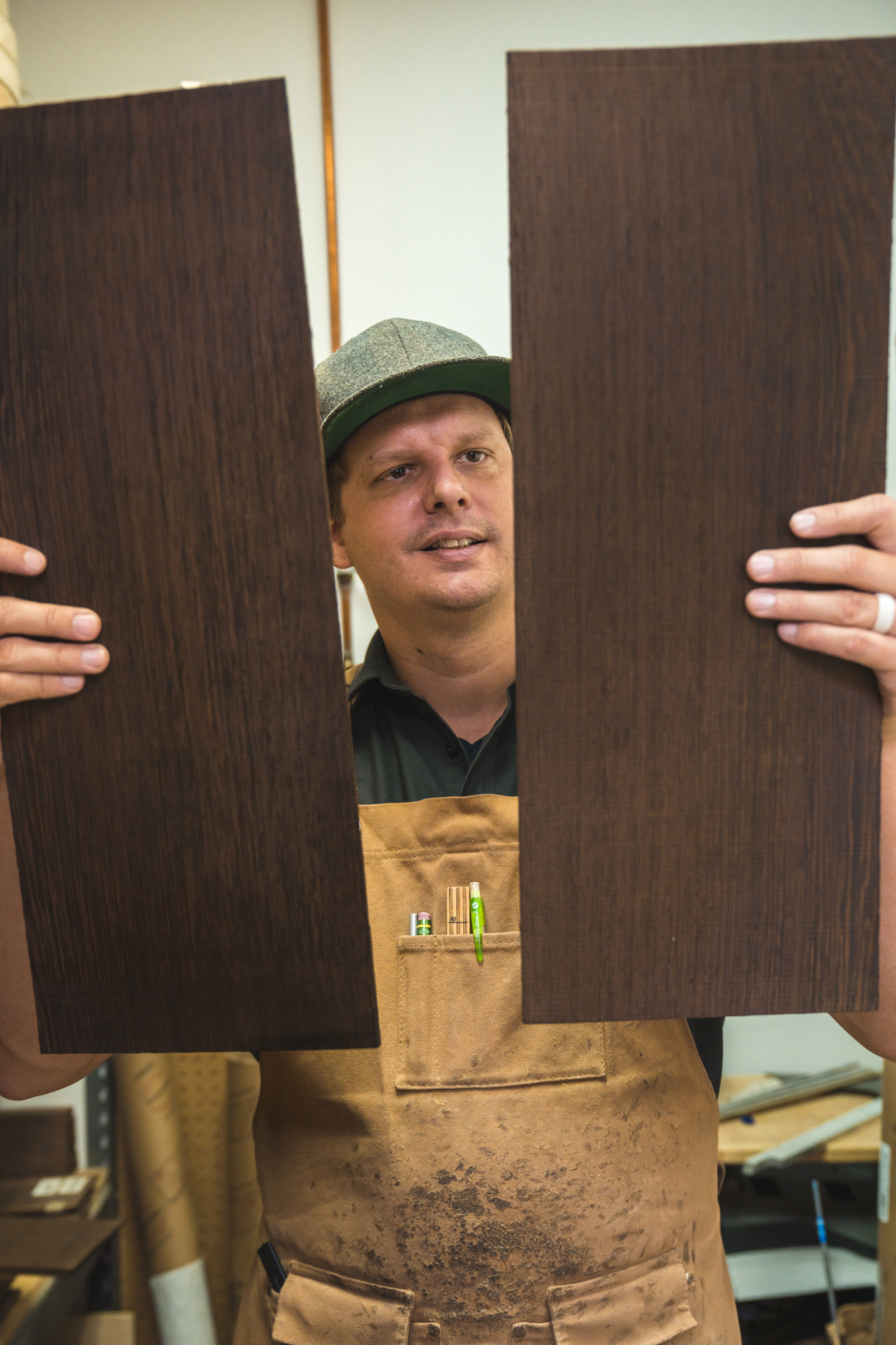 Enns started at Yamaha in 2018, driven by his love for steel string guitars and a desire to learn even more about his craft.

“It was time to grow,” he says. “I didn’t grow up in a world surrounded by classical music or flamenco or anything like that. But I grew up in a house filled with country music… and folk music.”

Enns’ Southern California workshop is based at Yamaha’s Custom Shop in LA. Although it’s been around for three decades, until recently this division focused on high-end electric guitars and basses and the needs of the Hollywood-based Yamaha clientele. Thanks to Enns, acoustics can now be heard in the halls.

In order to achieve this, everyday work in Enns is a mixture of old world and new tech. “I’m going to design and develop two guitars of my own, from my own head,” he explains. “And then they give me two or maybe four guitars that the engineers in Japan designed. You start with 100% hand work. I will chisel and hand carve each strut and tweak each tip with a scraper and then proceed as we define the specifications.” Each specification and change is documented in a 3D modeling program; The details can be dizzying. “Strut position is everything,” he adds, “to within half a millimeter of tolerance or even less.” 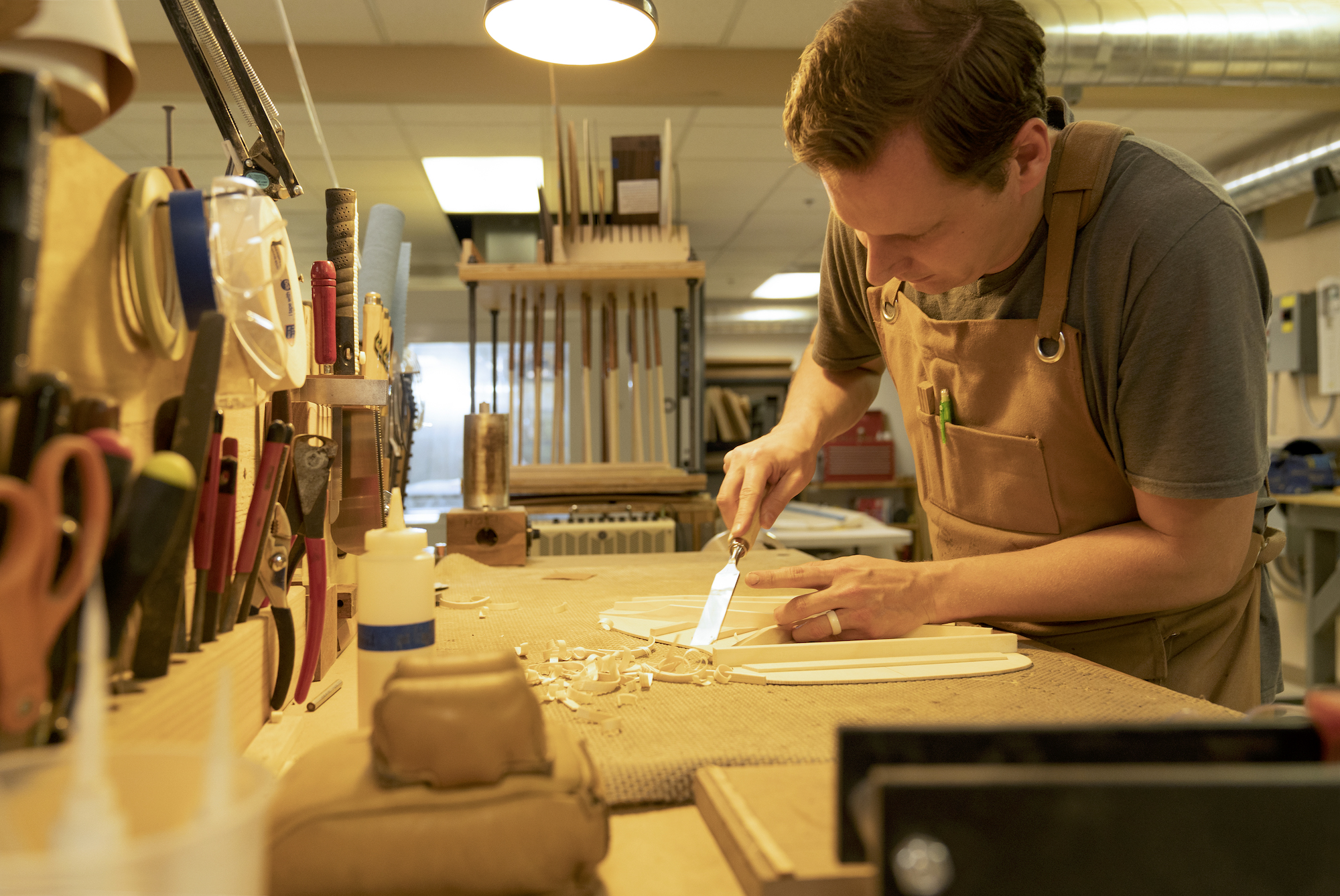 The process goes back and forth, with guitars, ideas and digital files flying across the Pacific at breakneck speed. The prototypes multiply as improvements are found. “[For] The guitars that we just finished prototyping, I think I made 40 [prototypes] for two models,” he says. “Some of them were kind of superfluous: ‘Well let’s do one with a bridge that’s a bit smaller…instead of a double-acting truss rod’, ‘let’s put in a traditional single-acting truss rod’… ‘let’s do a dovetail…'”

Enns is also able to draw on vast resources that few traditional luthiers have. “There is a whole department for materials development [at Yamaha]’ he continues, ‘and they test the wood for its properties to essentially come up with an algorithm that the computer recognizes: A 3.2mm Adirondack spruce top behaves differently than a 3.2mm Sitka spruce top. You can’t just say “spruce” on the computer. It has to be specific. Sourcing new materials, testing new materials, aging new materials is a long process.”

As for the finished guitars after all these experiments? Enns makes no claim to copy designs or tones from golden era classics by Martin or Gibson. “We have our own history and our own guitars,” he says. “What to do we sounds like? What do people know us as? Yamaha has more of a resonant quality. It’s not huge and bass-heavy, it’s not super mid-rich. It has lots of overtones and lots of clarity. So let’s build a big dreadnought with overtones and Clarity.” 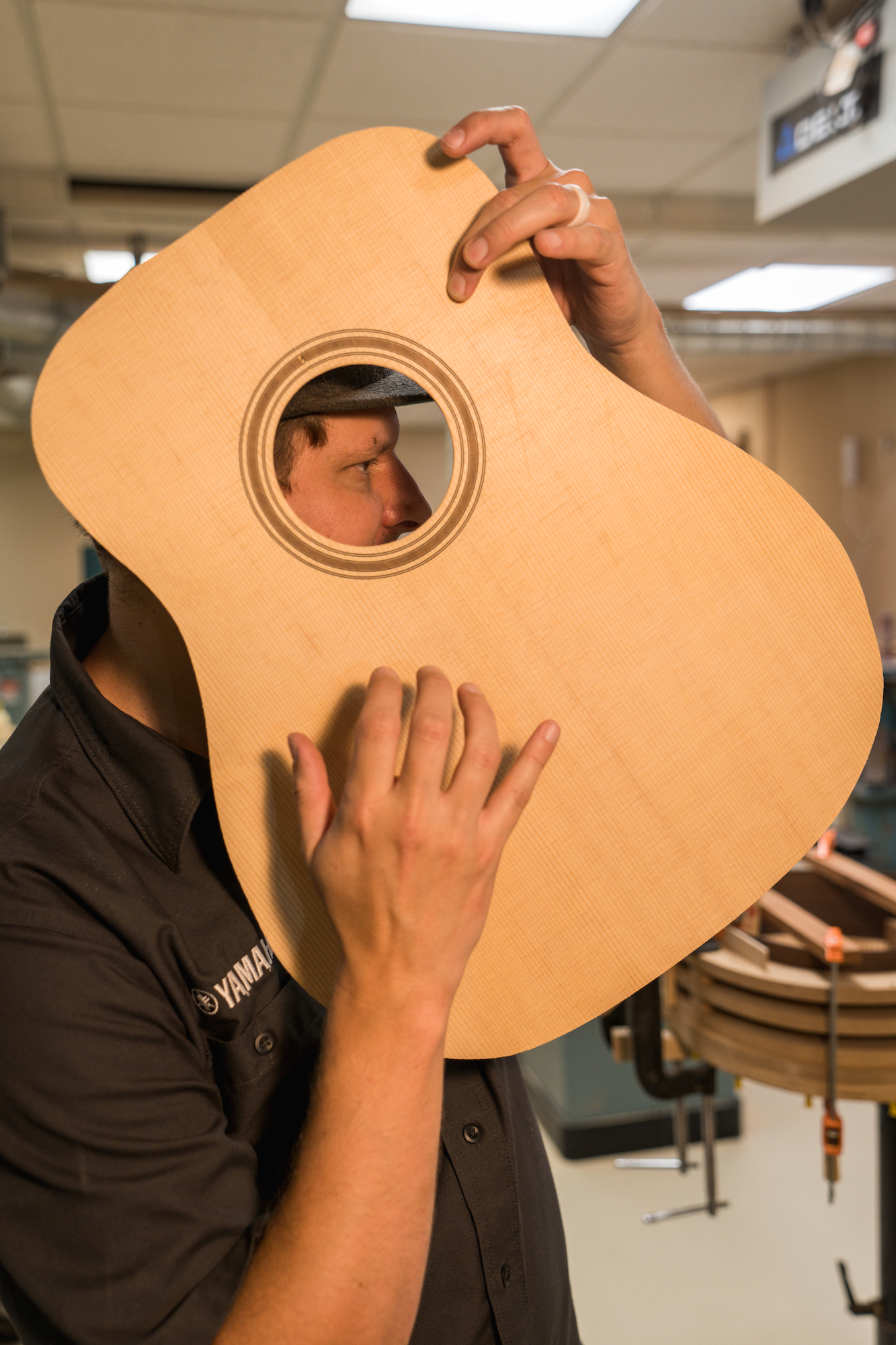 Farther on the horizon

Enns’ finished guitars are slowly being passed around and the musicians are beginning to take notice. Hawktails Jordan Tice can often be seen with his custom Yamaha. After trying them out at the 2022 Fretboard Summit, IBMA Instrumentalist of the Year nominee Jake Eddy is now using a Yamaha too.

Ultimately, the guitar designs are dialed in – down to the smallest detail – and built on a larger scale in Japan. Until then, there’s always more data analysis, prototyping, and fine-tuning to do. “It’s kind of like filling up the idea database to slowly and scientifically mince the magic that is an acoustic guitar,” he says. 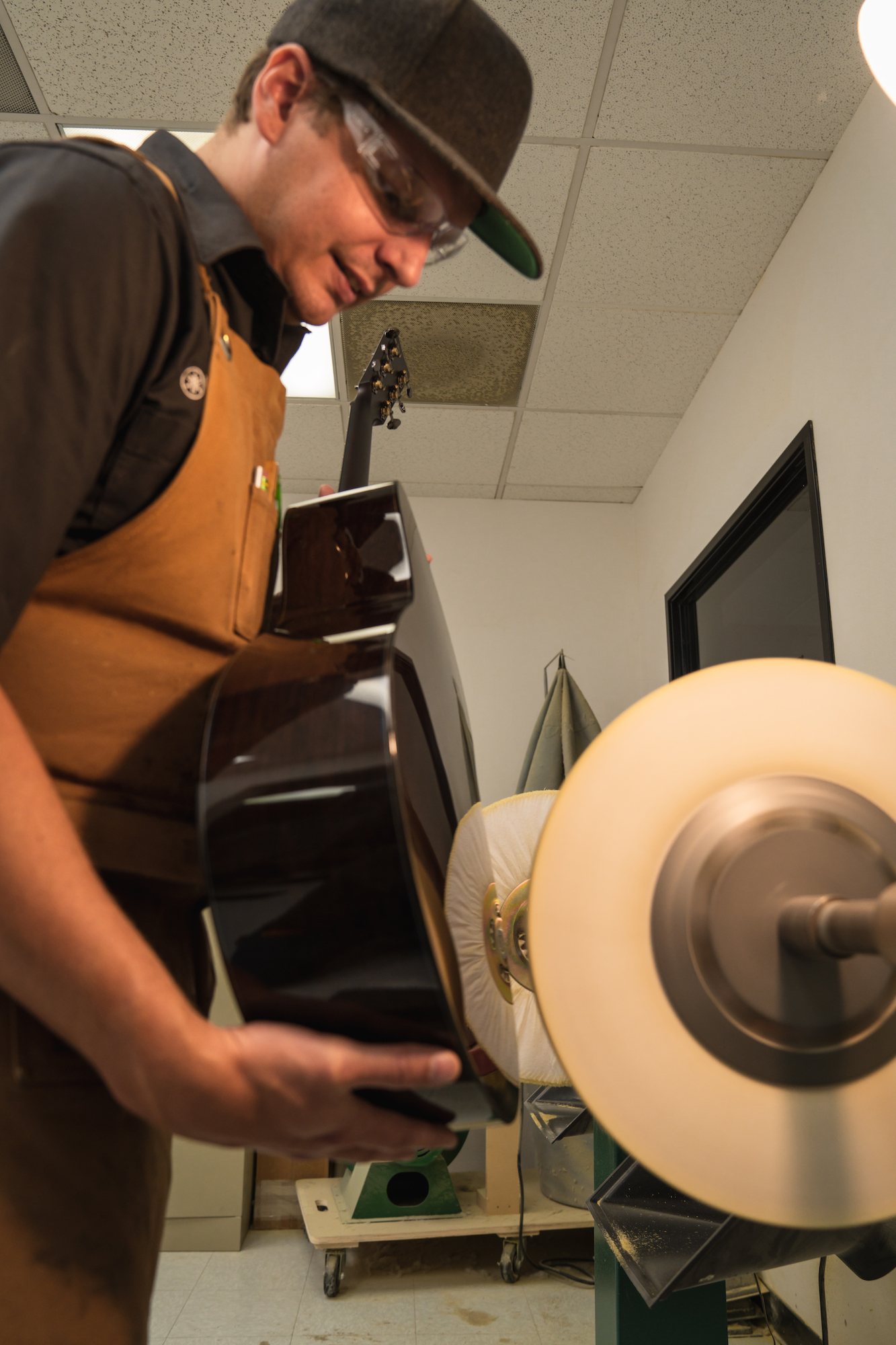