John Oliver began the final Last Week Tonight episode of the season by summarizing the nonstop clown show Twitter has become ever since Elon Musk paid $44 billion for the site a few weeks ago. But because members of the media are some of Twitter’s most enthusiastic users, the story of how Musk’s buffoonish management has all but destroyed the entire company has gotten about 44 billion times more attention than it probably deserves. So, as Oliver likes to say, moving on.

The show’s main story was about the World Cup, which Oliver described as “like the Superbowl, except the rest of the world actually gives a fuck.” Pretty accurate. The quadrennial tournament, which began Sunday, is put on by FIFA, which Oliver described as “a cartel-like group of scumbags and assorted criminals who occasionally put on soccer matches.” That description is also accurate.

This year’s World Cup is being played in Qatar, an oil-rich country the size of Connecticut that sits on a peninsula jutting into the Persian Gulf. It marks the first time ever that the tournament is being hosted in the Middle East, which on the face of it sounds like welcome progress. But this year’s World Cup, the 22nd to have been played since the tourney’s 1930 founding, is (at least arguably) FIFA’s most odious act of shameless grift ever. Which is really saying something! 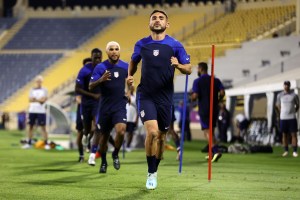 FIFA awarded Qatar this year’s Cup back in 2010, and it was a stunning decision for a variety of reasons. For starters, the Cup is played in the summer, when the average temperature in Qatar is somewhere around 110 degrees, i.e., potentially deadly for both players and fans. (The decision was eventually made to move the tournament to November and December.) In order to support the many games played and the influx of more than 1 million fans to watch them, the country needed to build an estimated nine new soccer stadiums and enlarge its capital city of Doha with a new airport, a new public transportation system, new roads, and about 100 new hotels.

“Qatar wasn’t just a surprising choice, it was logically inexplicable,” Oliver said. “It would be like if the Westminster Dog Show awarded the Best in Show title to a tortoise. Nothing against that tortoise, but not only should it not have won, it should have been automatically disqualified.”

FIFA was well aware of all of these issues. So why did the organization award Qatar the Cup? You will be shocked to learn that it had to do with money. Qatar allegedly bribed FIFA’s notoriously corrupt officials with millions of dollars, though the country denies this.

Still, the fact that Qatar was able to pull off the massive project is impressive. For instance, Lusail, a city about 14 miles north of the Doha city center that will host some of the matches, straight up did not exist a decade ago. According to one estimate, the country spent more than $300 billion on new infrastructure, which it could afford to do because it has a bunch of oil. What it doesn’t have, however, is a bunch of people; there are fewer than 400,000 Qataris living in the country. So who the hell built it all?

Well, it turns out the project wasn’t impressive—it was horrific. Because everything was effectively built by migrant workers who were enslaved by the country. In order to build all that shit in just a decade, Qatar recruited hundreds of thousands of workers mainly from India, Nepal, and Bangladesh.

These workers weren’t allowed to change jobs. They often had their passports taken from them by their employers, making it impossible for them to leave the country. They were forced to work in 120 degree heat. They were housed in stifling slums, sleeping together in rooms crammed with bunkbeds infested with bedbugs. They had nowhere to shower or bathe. In one case, 600 men had to share two abysmally filthy kitchens. And on top of all that, workers weren’t even paid what they were promised — or in some cases, paid anything at all.

To be fair to Qatar, some of those workers may have failed to receive their pay because they died on the job. One investigation found that between 2010 and 2020, about 6,500 migrant workers died in the country, though the government in turn claims that there were a total of 37 deaths at stadium construction sites, only three of which were work-related. An even more laughable claim made by both Qatar and FIFA was that they had actually scored a victory for human rights because a handful of middling work reforms were put in place… after almost all of the work was done.

“When FIFA awarded Qatar the World Cup, there was only one way those stadiums were getting built, and there was only one group of people who was going to do it,” a clearly enraged Oliver said. “And [FIFA] gave them the tournament anyway.”

In other words, FIFA knew they were sparking mass human rights abuses by awarding the Cup to Qatar. They also knew Qatar gives women very few rights and criminalizes homosexuality. But FIFA had previously held the World Cup in Benito Mussolini’s fascist Italy in 1934, in an Argentina run by a brutal military junta in 1978, and in Vladimir Putin’s Russia in 2018. Awarding the Cup to Qatar was kind of on brand. One of the countries in the running to host the 2030 Cup? Saudi Arabia.

The end of the World Cup story was not the end of the show; this being the final episode of the season, Oliver did a brief retrospective. He repeatedly called 2022 a “weird year,” which is undoubtedly true. But the weirdest part of his retrospective was that he said almost nothing about the show’s biggest story of the year — their possession of potentially damning information about the online habits of Congressional politicians. On an April show Oliver had explained that data would never be released as long as Congress passed a law making that kind of data gathering illegal. No law was passed, but Oliver barely referenced the data during the retrospective. It was a huge disappointment.

The story Oliver did revisit involved images created by artificial intelligence. Without getting into the weedy details of why, this allowed Oliver to end the show the same way he’d started it — with a clown show. Dozens of the things streamed into the studio, many of whom were riding unicycles.

“Here it is — the physical manifestation of the past year,” Oliver said, seemingly both delighted and horrified by the spectacle. “Look at all these fucking clowns…. Look at this utter atrocity.”

Breakfast Charcuterie Board | The Recipe Critic

16 wonderful winter recipes we can’t get enough of

From one-pot wonders to energy-efficient recipes that won’t blow the budget, we’ve got you covered on the food front...